It has been quite a while since a thriller as taut and superbly crafted as The Invitation has come along. Written by Phil Hay and Matt Manfredi, and directed by Karyn Kusama, the premise is simple enough: a former couple and their group of friends re-unite at a dinner party after not having seen each other for two years. But the nervous awkwardness that inevitably comes with the passage of time soon becomes infused with a more suspect and unsettling mood. The performances, the screenplay and the lighting are all finely tuned and seamlessly integrated, and Kusama handles this balance with such control and finesse that the film becomes an almost unbearable exercise in sustaining tension.

Will (Logan Marshall-Green) used to be married to Eden (Tammy Blanchard), but separated two years ago after the death of their son. She is now with David (Michiel Huisman), and together they have invited Will and their mutual friends over for dinner and drinks. It is immediately apparent that Will and Eden still have unresolved issues, and Will in particular appears increasingly uncomfortable, trying to fend off the memories of their son and keep his grief at bay. However, as the night progresses and the group sees how well Eden is coping, Will’s quiet anguish becomes suffused with an inexplicable suspicion. Grief and mistrust blend into and reinforce each other, until he cannot tell the difference between rationality and paranoia. 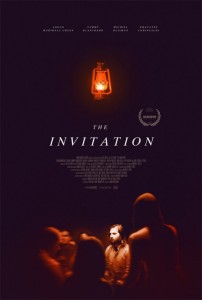 The film’s success in maintaining a simmering unsettling anxiety until the very end must first be attributed to its terrific screenplay. It is so finely calibrated and tightly written that nothing feels gratuitous or superfluous, and yet there is also a surprisingly refreshing dark humour to the film that only exacerbates the uneasy mood. This delicate balance is brought to life and maintained by the fantastic, consciously diverse ensemble cast, whose conversations and interactions vacillate somewhere between relaxed, awkward and perplexing. Amongst the uniformly strong cast, Blanchard and Huisman deserve particular mentions for their layered, controlled work.

In the end though, Marshall-Green puts in the most compelling performance. Despite his generally tight-lipped demeanour and rigid posture, there are shades and subtleties to Will’s inner turmoil, a variable mixture of sadness, anger and mistrust. His performance is complemented by the house itself, which is darkly sleek, polished and eerily lit, evoking an intensely disquieting ambiguity.

Overall, The Invitation is a masterfully executed, gripping thriller, one in which all of its elements work exceptionally well to ensure that the tension never eases up.

The Invitation screened at the 2015 Melbourne International Film Festival.