There is a messiness to youth, and how we remember it, that is visceral, often indescribable. This is my first encounter with French director Arnaud Desplechin’s work, but if his latest film My Golden Days is anything to go by he has a distinct flair for capturing this messiness. Co-writing the screenplay with Julie Peyr, the film is a stirring, impassioned ode to that one relationship that lingers in your memory and consciousness long after it has ended. Its arresting cinematography, charismatic performances and upbeat 80s soundtrack all delightfully come together to create an immersive nostalgic mood, one that indulges in both candid emotion and wistful reflection.

Anthropologist Paul Dédalus (played as an adult by Mathieu Amalric and by Quentin Dolmaire as a teenager) is returning to Paris after years of conducting fieldwork in several faraway locations. Various encounters compel him to reflect on three key stages of his youth: his tense relationship with his psychologically unstable mother, an incident which involved him giving his passport away in Ukraine, and a prolonged and passionate relationship with his younger sister’s classmate Esther (Lou Roy-Lecollinet). The last of these stages takes up the majority of the film – a swirling, fervent relationship impelled by all the headiness of impetuous youth. It is this relationship that Paul has not ever fully recovered from. 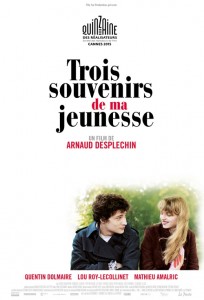 Desplechin and Peyr’s screenplay is generous, even to the supporting characters, such as Paul’s younger sister expressing lack of confidence about her appearance, to his cousin being kicked out of home. But ultimately, the film is anchored by the two fantastic performances of its leads, and importantly neither is idealised because their flaws and shortcomings are also on display. Dolmaire’s Paul is idealistic and driven, but he is also a little misogynistic, even resentful at times. Roy-Lecollinet is coquettish and charming as Esther, but also emotionally immature and flippantly dismissive. Together, they have a turbulent chemistry that begins as innocent flirtation and ends with bouts of volatile emotion. Desplechin prefers abandon over restraint, expression over repression. Often the camera shots are awkwardly close, or slightly off-centre, lending even their conversations a sense of electric intimacy. Their love letters are written with flurries of convoluted passion, so that the meanings of the words matter less than the attempt to convey what they cannot clearly articulate. At times this indulgence can be sentimental and cloying, but, equally arguably, perhaps that’s the point. My Golden Days wants evoke the ineffable emotion of uninhibited youth, and it succeeds in doing so.

My Golden Days screened at the 2015 Melbourne International Film Festival.

Written By
Dan Santos
More from Dan Santos
The Selfish Giant, inspired by the Oscar Wilde short story of the...
Read More