Southpaw begins with a powerful opening sequence; Billy Hope (Jake Gyllenhaal) has thrashing heavy metal music pounding into his ears via headphones, as a team of people bandage his wrists in preparation for a fight. Fight officials supervise proceedings; Billy is seemingly oblivious to what’s going on around him. His wife Maureen, or Mo for short (Rachel McAdams), joins him in the dressing room after everyone else has left, a few words of encouragement passing from her lips. Then there is the fight. Billy wins convincingly, but it takes him longer than usual to get the advantage – his wife and crew are clearly frustrated. At home later, Mo encourages Billy to take a break from fighting. She knows he is running out of steam, and that most of his crew will desert him if he crashes.

Mo’s concerns prove to be prophetic. When she is killed by a stray bullet during a fight between Billy’s crew and that of a rival boxer, Billy’s life quickly descends into chaos. Mo has always been the brains and business savvy of the pair, and without her Billy is completely adrift and at the mercy of his sleazy manager Jordan (50 Cent/ Curtis Jackson). He loses his house, all his possessions, and his daughter Leila (Oona Laurence). With his tail between his legs, Billy approaches trainer Tick Wills (Forest Whitaker) for help, hoping Tick can help him get on track. 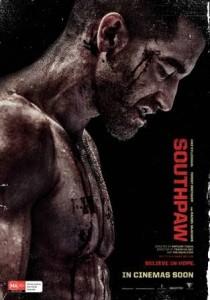 What is really marvelous about Southpaw is Jake Gyllenhaal’s performance. He gives a physical, primal performance in the role of Billy. In the boxing ring he is fierce – wild like an animal, screaming at the crowd and down the camera, with blood, sweat and saliva spattering across the lens. Outside of the ring he is angry and lost. He ranges from being like a powder keg poised to explode, to frightened prey. When he meets with his case worker he can barely meet her eyes, his head down, shoulders hunched, waiting for her approval and instruction. Billy is not really smart enough to handle himself without Mo, and his lessons in where to place his trust in her absence are hard learned. Gyllenhaal manages to present this without making Billy too extreme.

Although her screen time is relatively short, Rachel McAdams is very influential. She makes up one part of a very impressive support cast, not least of which is Oona Laurence. She is very convincing for someone so young, ‘punching her weight’ with some seasoned performers in Gyllenhaal, Whitaker and 50 Cent. Every appearance from 50 Cent as the corrupt Jordan feels like a sighting of the devil.

There is something a little inarticulate about this film – it is not merely the mumbling dialogue from Gyllenhaal and his entourage. It is clearly a story of redemption, we get that, but the film has a groggy quality to it, not unlike Billy’s character. Boxing is always a popular film subject, and while this film is a fine example it is not one of the best. Director Antoine Fuqua seems to squander a few good opportunities, and, despite an impressive CV, writer Kurt Sutter relies on a few too many clichés and conventions. Despite this, the film is still quite stylish. As mentioned, performances are great and there is some good use of more obscure cinematography to accentuate the severity and violence. Southpaw is not great cinema, but it is solid entertainment.

Southpaw is in cinemas from 20th August through Roadshow Films.

Written By
Amy Taylor
More from Amy Taylor
Based on the true story of the first US troops on the...
Read More