Iris Apfel, the subject and namesake of the Albert Maysles directed documentary Iris, learned early in her life that she wasn’t pretty. But pretty fades and Iris had something far more important: style. The rest of us can only aspire to live and age in such style as Iris and her adoring husband Carl.

Iris and Carl live between their apartments in New York and Palm Beach. They are avid collectors of all sorts of things. Mostly it is fashion, and mostly it is Iris who is their driving force and has the master taste. She collects everything from cheap, costume jewellery, to bespoke designer items, to second hand pieces from the flea market. And Iris wears what she collects. She is not afraid to match a dozen plastic necklaces with a designer jacket and basic black jeans. In other outfits she clashes patterns and colours in a way that betrays her unique sense of taste. Her style is eclectic to say the least, in one outfit it is hard to figure out how she can stand up with the weight of all her accessories (she does admit to wearing one set of bangles only when she knows she can go home after half an hour, they are so heavy). 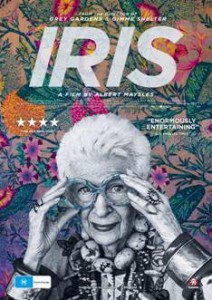 In addition to Iris’s fashion collection, the couple have an incredible assortment of home wares. Somehow Iris and Carl manage to collate their pieces in the most intriguing manner, despite the sheer volume of their possessions. Their recollections of where and how they came across individual items are so warm and colourful; their ability to tell a story is truly engaging.

What is really at the heart of this film is a complete sense of joy and marvel which Iris and Carl share with the filmmaker and audience. Their love story is utterly beautiful and the story of their relationship is told using old photographs and Carl’s 16mm travel footage from their many trips to Europe and around America. Despite being in their ‘twilight years’ (Iris is 93, Carl celebrates his 100th birthday during the film), the couple maintain a sense of childish wonder in everything around them.

The documentary is marked by a sense of affection. The affection everyone feels for Iris and her husband Carl, their devotion to each other and their marriage, director Maysles’ affection for his subject, and hers for him. And flamboyancy never looked so good as it does in the case of Iris Apfel.

Iris is in cinemas from 20th August through Madman Films.