Imagine someone has a great video on their phone to show you. Do you want them to keep the phone in their pocket and then proceed to tell you exactly what happens on it, or do you want them to get it out, shut up and press play? It’s a stupid question, surely. A basic tenet of good narrative is show, not tell.

However, this is the central failure of Guy Ritchie’s new film The Man from U.N.C.L.E, based on (and a sort-of prequel to) the 1960s TV series of the same name. An audience doesn’t want a character’s entire backstory and analysis of their behaviour explained to them in a three minute monologue dump. They want to glean it for themselves through the character’s actions, expressions, decisions and interactions with others. They don’t need the plot laid out and clarified at half hour intervals through briefings, “let me get this straight…” expositional dialogue and flashbacks to earlier scenes (sometimes two or three times) basically saying “Remember. Remember?” Audiences don’t need that much hand-holding. But it seems like Ritchie thinks they do; that they need to be clearly guided through his story that really isn’t that complex – after all this is the director who thought his use of chess as a metaphor for life in Revolver was so original and intricate that it required explaining in the DVD commentary. Or maybe he’s just lazy – it’s much harder to reveal things through careful plotting and character development than it is to just have someone say “Hey guys, this is what’s happening!”

The film, set in the early 1960s, follows Napoleon Solo (Henry Cavill) a CIA agent who must join forces with KGB agent Illya Kuryakin (Armie Hammer) to take down a criminal organisation intent on creating a nuclear weapon. This is Ritchie’s first writing credit since 2008’s RocknRolla and it feels rusty – it lacks the whip-smart dialogue of Lock, Stock and Snatch, relies far too heavily on exposition and lacks structure in the plot (thankfully it also lacks the affected grandiosity and pseudo-intellectualism of his Revolver). Does this make it a bad film? Not at all, there’s definitely something in there – but good moments of much potential are lost among mediocrity. 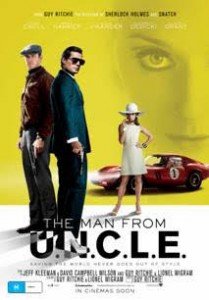 Let’s get to some of the good things. Armie Hammer (The Social Network, and whose performance was buried amid the Johnny Depp furore in The Lone Ranger) does good work with quite little material as Illya. He fits the ‘Ivan Drago’ Russian man-mountain mould very well, but also brings layers to his performance, depth behind the eyes, even if his entire character is literally spelled out early on. There’s more than enough there to suggest he can handle bigger and more challenging parts. Alicia Vikander brings nuance to her role as Gaby, the German mechanic who joins the two agents on their mission to find her father. Even if she’s given little more to do than talk (with sudden character and relationship development manifested when deemed necessary for the plot), she effortlessly blends allure, no little mystery and even physical comedy in her performance. Building on an incredible showing as a deeply complex and often unreadable robot in Ex Machina, Vikander is an actor to keep a close eye on.

Ritchie’s direction feels a bit more stripped down than usual, lacking the visual flourishes of his earlier films and the Sherlock Holmes series, but it still looks great at times – his camera luxuriating over the retro objects, locations, and clothes. One can see though how the 60s setting and aesthetic could have worked wonderfully in the hands of Steven Soderbergh, the director originally attached and who so expertly channelled it for Ocean’s Eleven. Soderbergh would have also handled the action scenes better, with Ritchie far too insistent on moving the camera and unnecessarily cutting quickly between shots, which muddies the action. The majority of those scenes are pretty standard affairs – except for one which blends comedy and action really well, and a torture scene that is shot and edited in a way that feels like it’s influenced by Tarantino. Coincidentally that scene also features very nice work from Sylvester Groth, who played Goebbels in Inglorious Basterds, and who gets far too little screen time for someone of his skills.

The other big misstep comes in the casting of Henry Cavill as Solo. Many actors were considered for the role in the ten years that Warner Bros tried to get the project off the ground, from Ryan Gosling to Matt Damon, Jon Hamm to Leonardo DiCaprio, and even Joseph Gordon-Levitt. Any of them would have been a better choice really. That’s not to say that Cavill is bad per se, just that he doesn’t fit the role, doesn’t have that sense of guile, that glint in his eye and smart mouth that convinces you he’s a master thief turned master spy. His decision to try and sound smart and witty by splitting sentences into about three words at a time with strangely timed inflections is odd at first, and grating later on. Cavill works as Superman because he’s pretty bland. Superman is a blank slate of a superhero – he’s a symbol that people project their hopes on to. Cavill gives you that. What he doesn’t give you is the commanding central presence and physicality of Tom Cruise’s Ethan Hunt or Daniel Craig’s Bond – or the blend of the two that Robert Downey Jr. gave Ritchie in the Sherlock films. There’s some chemistry between Cavill and Hammer, just not on the same level as Hammer and Vikander, and not as clearly coming from both parties.

All this being said, this is a solid way to spend a couple of hours – not the pure action thrills of Mission Impossible: Rogue Nation or even the few laughs of Ant-Man, but there’s enough here to warrant a watch, perhaps for Hammer and Vikander alone.

Written By
David Nagle
More from David Nagle
Throughout the recaps of this season of Louie we've continually been asking...
Read More