In Cartel Land, director Matthew Heineman provides a terrifying look at the ongoing drug cartel crisis in Mexico by telling the stories of two men trying to thwart their activities. The film is a sobering, often confronting insight not only into how Mexican drug cartels are wreaking havoc both within Mexico and across the US border, but also the extent to which distinctions between outlaws, vigilantes and the government seem to blur and bleed into each other. Subsequently, more ideological borders – between ‘good’ guys and ‘bad’ guys, between right and wrong – are not only highly susceptible, but also disturbingly simplistic and inadequate.

In the state of Michoacán, located in south-western Mexico, the Knights Templar Cartel exerts brutal control over several towns, beheading and butchering people who defy their authority or who were simply at the wrong place at the wrong time. In 2013, Dr José Mireles, deciding not to sit idly by and wait for a seemingly inevitable death, founded the Autodefensas, a group who arm themselves to defend their families and properties. They wage an arduous and stirring campaign to rally people together and reclaim back Templar-controlled territory, but in so doing encounter condemnation from without and corruption from within. In Arizona, the porous US-Mexico border allows drugs to be smuggled over, and Tim “Nailer” Foley has taken it upon himself to establish the Arizona Border Recon to counter and impede drug and people smuggling. They patrol the borders and apprehend cartel-employed sentries, adamant that hopelessly inefficient, even indifferent authorities are not doing enough to protect them and the country. 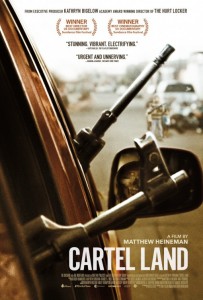 The film firstly foregrounds the very real risks and brutality that unfold on a daily basis. Footage of shootouts and arrests as they happen are incredibly taut and tense, and when several people share their stories of their unfortunate encounters with the Knights Templar, the sheer scale of merciless suffering caused by drug cartels is rendered soberingly vivid.

Heinemen is also vested in pointing out broader dilemmas. In both cases the perceptions and stigmas surrounding the figure of the ‘vigilante’ are explored, along with the associated implications for understandings of justice, authority and legitimacy. How can we clearly identify the ‘good’ guys when there are people serving as law enforcement officers whilst also being associated with drug cartels? Who are the ‘bad’ guys when those making the drugs in the first place are also financially supporting groups fighting against the cartels? In some cases, clear lines simply cannot be drawn.

Arguably, the film could have focussed only on the Mexican side of the story, which was given more attention and was imbued with a more pressing sense of urgency. Nevertheless, Cartel Land is a riveting, uncompromising film, one that complicates and undermines simplistic characterisations of the issues it presents.

Written By
Dan Santos
More from Dan Santos
There are few films in recent memory which are as magnificently crafted...
Read More