Desire for Beauty adds another voice to the discussion of beauty and how we define it, specifically looking at plastic surgery. The film documents the journey of four young Polish subjects who all feel they need plastic surgery for a variety of reasons.

Of those four only three proceed and are really given screen time with the fourth explaining she felt desire to pull out due to the superficial nature of her procedure. Kasia Kuba and Kamilla do proceed and all have varying reasons for doing so. Kasia, a mother feels internalised pressure to enlarge her breasts, Kamilla wants to reduce the size of her nose with the shadow of childhood bullying still looming over her, and finally Kuba wants to fight his natural aging process with botox and lip enhancement. The movie neither condemns nor conflates their reasons or body image hang ups, taking as much of a neutral position as possible when talking about such a sensitive subject everyone has feelings about one way or the other.

The movie starts with a convoluted warning for viewers – the film you are about to see will blur the line between documentary and film. What the film makers mean by this is that they will unnecessarily interject overly long scenes of wince inducing ‘artistic imagery’ to create and reflect certain moods. This translates into insipid shots of their actor/subject running through woods, or a sped up frame of clouds moving while ominous piano plays. These scenes are all too melodramatic and not at all conducive to the narrative. When used, the traditional gonzo documentary style work well for the veteran director Miguel Gaudencio. He deserves applause for stepping outside of the box and taking risks film-making wise, however it really slows down this film and makes its 90 minute running time feel more like 120+. 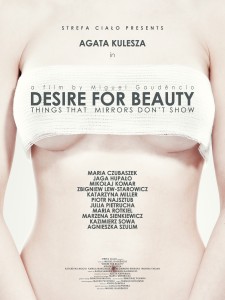 Another issue with it was the ending. There is plenty of fascinating and meaty dialogue and interviews for the viewer to wrestle with and take out what meaning they will. But the ending falls completely flat and loses any momentum the film had earned. After a massive build up and capture of the great emotional and physical toil the surgeries had on its patients, we’re fed what feels like a cheap two minute wrap up from each participant on how they feel about their surgery.

Desire for Beauty tackles an extremely prickly issue in a very sensitive and satisfying unbiased manner. All of its subjects are afforded a strong voice as to why they want plastic surgery. There’s a raw truth being mined, with each individual having fascinating and sincere responses to the surgery itself and the motivations. It’s hard not to be intrigued by what drives undeniably very attractive Kasia to alter herself in such a dramatic way. Hard not to feel empathy and sorrow for Kamilla overcoming emotional trauma years of bullying has done. The lone male in the documentary though, Kuba, is maybe the most interesting.  The guy is so superficial and frustrating, yet vocalises with ease his greatest anxieties and dreams in one sentence. Included in the documentary are expert opinions from psychologists, though it’s a shame they excluded a voice from the medical field with no surgeons being interviewed. The most interesting and insightful musings came not ironically from model and actor Julia Pietucha. The film is engrossing and frustrating all at once. The participants are engrossing, however it’s really hard not to feel frustrated by how it’s presented and the dull cinematic techniques used and missed opportunities not taken.

Desire for Beauty is available on Video on Demand