A Patriotic Man documents the experience of a Finnish man when he joins the support crew of the national ski team. The most recent film from writer/director Arto Halonen, A Patriotic Man is a strange sort of film. With an overarching sense of comedy and poignancy, despite the bleak nature of the story, the film asks ‘would you bleed for your country?’

Toivo (Martti Suosalo) has lost his job as a factory worker and is now going to be at home while he figures out what to do next. His wife suggests that he could give blood to kill a few hours; the hospital where she works as a midwife will gladly accept the donation. While at the hospital, the sports mad Toivo discovers that his blood has a rare and potent quality, as well as being particularly compatible with other blood types. The doctor has connections with the national ski team, and suggests that if Toivo is a patriotic man he might like to join the support crew.

When Toivo begins work with the ski team, he initially thinks he is there to carry the equipment. He meets the team, including the beautiful and competitive Aino (Pamela Tola). The rest of the crew are pretty brutish, and while Toivo is not the most refined chap himself, he is still a little taken aback by their loutishness. Soon the head coach Ilmo (Janne Reinikainen) makes it clear what is expected of Toivo, if he is, indeed, a patriotic man. Toivo is there to have his blood transfused into the skiers when the stashes of their own blood run out. Toivo is just another resource in a complex doping scheme. He is surrounded by some morally ambiguous – and amoral – characters. When he questions the doping program, Toivo is frequently told that it is for the good of Finland. While Toivo is initially reluctant, his affection for Aino and his desire to see her win a medal sees him concede to the program. 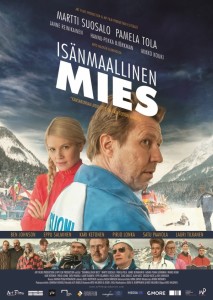 A Patriotic Man is a curious film, in that it is still quite humorous despite the grim nature of the subject and Toivo’s experiences. Toivo is an ox of a man, a heavy drinker and smoker, seemingly unmovable both physically and emotionally. It seems implausible that he could be the perfect specimen for the team’s needs. Yet, he has a gentle nature and his affection for Aino is touching. The performance of Suosalo is particularly good, as he balances both the rough and tender qualities of Toivo.

The editing of the film is a little jarring, sometimes the story jumps ahead days and months with too few markers to keep the viewer up to speed. An entire summer seemed to skip, one winter blending too quickly into the next. But this is a minor quibble, as generally the film gives just the right amount of information to maintain the narrative, nothing superfluous.

A Patriotic Man screened at the Scandinavian Film Festival

Written By
Amy Taylor
More from Amy Taylor
Seeing our own stories on screen is always reassuring. There’s a sense...
Read More