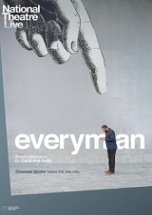 People who don’t go to the theatre often might be familiar with that age-old question of ignorance, which one leans over to ask someone more knowledgeable: “Is this good theatre or not?” This reviewer didn’t have that luxury, but it’s probably a fair indication that if you have to ask the question, it’s certainly not the best. Ultimately, while it’s easy to recognise talent heaped in abundance – as it is in the modern reimagining of the 15th-century morality play Everyman, directed by Rufus Norris and written by Carol Ann Duffy – one would hope that this amounted to a bit more.

Chiwetel Ejiofor in the tradition of many established screen actors now heading to the National Theatre stage, has chosen a play to demonstrate the full breadth of his talents. It’s a brave role, ultimately a one-man show supported by a cast of bit-characters, which include Death, God, Good Deeds, Goods, Kindred, Fellowship/Senses and Wits. In many ways through his raw and energetic portrayal, he succeeds, while at others he is let down by the material given.

Ejiofor plays the titular character as a selfish, coke-sniffing, materialistic, but nonetheless popular man, “in his fuckin’ prime” living an excessive but shallow life. His entry onto the stage, evoking the falling man from the credits of Mad Men, is perplexing at first but gains significance as the play proceeds and Death comes calling (whether as a dodgy car salesman or crime scene cleaner, I couldn’t be sure which). This is the story of Everyman being asked to consider the sins of his existence as he is confronted with a demise he believes is unfair.

Duffy and Norris have clearly made a point of having fun with this. In the process of his flight, Everyman calls God a “sick f**k” and Death a “c**t”, which I’m guessing weren’t lines drawn from the original, and these are just a few of the scattered laughs throughout. But the play is a generally melodramatic affair that doesn’t have the emotional punch it aims for.

The actors’ delivery is natural and lively and the scene-changes well-choreographed, but the main problems here lie in reconciling an archaic play with a modern sensibility. The simplistic bank of 15th century ideals transposed to a more complicated 21st century, replete with many diverse and equally valid lifestyles, doesn’t always ring true. And if it does ring true, the message of living an altruistic and selfless life in order to leave a good legacy isn’t particularly revelatory or treading any new ground. Nor is the denunciation of the importance of riches and popularity.

There are many bright spots to admire though, including one particular line towards the end, which puts Everyman’s egotistical obsession with Death as a malicious entity into perspective. God, played by Kate Duchêne as a jaded and thankless cleaner, regards with disdain Everyman’s reaction to arrival of Death : “You’re taking it very personally”.

National Theatre’s Everyman will be on limited release from August 8 through Sharmill Films.