In Swedish film Blowfly Park, director and screenwriter Jens Östberg has crafted a restrained and stylish portrait of an ordinary man grappling with the consequences of a single, fateful night. Östberg’s style is evidently tightly controlled, and yet events seem to unfold with a mundaneness that shifts the film’s focus and impact away from plot and more towards tracking internal psychological tension. However, the plot does not feel substantial enough to make the film captivating on psychological grounds alone, and whilst Sverrir Gudnason’s lead performance definitely has its moments, his performance is perhaps too withdrawn to sustain our attention. Subsequently, whilst the film has its moments of moving clarity, it does not quite achieve the heights of emotional impact it is aiming for as it never really becomes a cohesive whole. 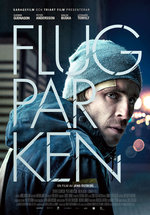 Kille (Gudnason) is a man in drift, without a clear sense of direction. He used to be a talented hockey player, but now he lives alone and works at a local primary school, where his best friend Alex’s (Leonard Terfelt) young son also goes to school. One night, Kille is forced to take him home after he has done some heavy drinking. Alex’s drunken meanderings lead him to take Kille into the woods to supposedly show him a fox den, but Kille’s frustrations lead to a brawl and Alex falls over and hits his head. What follows afterwards remains inexplicably and tantalizingly ambiguous, but Alex’s subsequent disappearance weighs heavily on Kille, along with Alex’s wife Diana (Malin Buska), whom Kille has a history with. The rest of the film is devoted to Kille as he tries to get on with his life whilst processing the aftermath of these events.

Östberg sustains questions about Kille by deliberately focussing on the routine and the everyday, and Gudnason does a mostly commendable job of raising lingering doubts about the night that Alex disappears, even if his performance is perhaps a little too distant for most of the film. However, the dark, foreboding score that often accompanies these scenes seems to work against this subtlety, as if artificially trying to induce suspicion. Additionally, a secondary plotline, which involves Kille being robbed by a gang of youths and his attempts to gain revenge, also comes across as a little contrived in demonstrating Kille’s willingness to contemplate resorting to violence as an outlet for his stress.

Blowfly Park has several well-executed features, but overall its premise is a little too slight to be thoroughly impactful and thought-provoking once the film ends.

Blowfly Park is showing at the 2015 Scandinavian Film Festival.

Written By
Dan Santos
More from Dan Santos
In 1996 Infinite Jest was released. A sprawling, postmodern epic, it is...
Read More