One of the more interesting developments in entertainment over the past few years has been the resurgence of Sherlock Holmes. Sir Arthur Conan Doyle’s most famous creation first appeared in 1887 and has been an integral part of popular culture ever since. Over the years there have been no less than 75 actors who have donned the deerstalker and puffed away at that signature pipe, culminating in the past few years with Robert Downey Jr in the Guy Richie films, Jonny Lee Miller in Elementary and of course Stephen Moffat and Mark Gatiss’ phenomenally successful Sherlock which propelled Benedict Cumberbatch to the Patron Saint of Tumblr.

Mr. Holmes, based on the novel ‘A Slight Trick of the Mind’ by Mitch Cullin, presents one of the most original takes on the character that we’ve seen in ages, focusing on a long retired 93-year-old Holmes (Ian McKellen) living in a remote farmhouse in the middle of the English countryside with his house keeper (Laura Linney) and her son (newcomer Milo Parker). As he approaches the end of his life his interest in detective work has vanished long ago, focusing instead on caring for the bees he keeps as pets and coming to terms with his mortality. The latest effort from Bill Condon, who worked with McKellen nearly twenty years ago on the Oscar winning Gods and Monsters, is almost contra the recent slew of Sherlock we’ve seen; imagining Sherlock Holmes as a normal man whose career was simply colored up via Dr Watson’s creative licence, a fact which annoys him so much he decides to write his own account of the final case he ever worked on, which haunts him to this day.

Fans of classic Sherlock might be a little put off by Mr. Holmes, there isn’t a single pipe or deer stalker in sight, he no longer lives on Baker Street , Dr Watson is only mentioned by name and Moriarty is totally absent. Instead, this is a film that plays a little like a period drama; a slow moving narrative set in the gorgeous Sussex countryside, more concerned with the exquisite costumes and grand themes than action scenes or intricate plot twists. While a degree of patience is needed for this thoughtful little film, Condon has created one of the most interesting and thoughtful interpretations of Sherlock Holmes in years, held together by wonderful performances and beautiful cinematography by Tobias A. Schliessler. 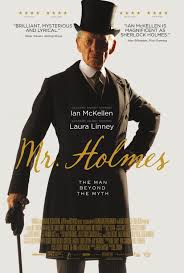 The reason this film works so well is Sir Ian McKellen, who embodies this old and fragile Holmes beautifully. His performance is exceptional – But at this stage does that even need to be pointed out? Dogs bark, birds chirp, people die, the government collects taxes and Ian McKellen gives astonishingly good performances. The rest of the cast hold their own, Laura Linney is perfectly cast as Holmes’ frumpy housekeeper and the genuine chemistry between little Milo Parker and Ian McKellen is one of the most beautiful touches to the whole film.

The really astonishing thing about the whole project is that director Bill Condon’s career has done a complete 180 from what the last few films he made. Prior to Mr Holmes he directed the notorious flop The Fifth Estate (which incidentally stared Benedict Cumberbatch) and the two-part finale to the Twilight Saga, including the execrable Breaking Dawn Part. 1. To go from those shallow, factory produced wastelands to this intelligent and mature film is the best possible way to reaffirm his credentials as being a very talented filmmaker.

It won’t be to everyone’s liking, but those who are willing to give this thoughtful, sad and ponderous little film a go will be rewarded with one of the most original and moving adaptations of Sir Arthur Conan Doyle’s beloved character.

Written By
Simon Storey
More from Simon Storey
In a career spanning over 50 years, Ken Loach remains one of Britain’s...
Read More