It isn’t always easy writing a review of a horror film. To start with there’s the inherent paradox that comes with the genre; films that are constructed for the express purpose of shocking, revolting and terrifying the viewer isn’t exactly what you’d call a grand ol’ time at the cinema. But then again a fine tuned horror film with some thematic depth can deliver the perfect blend of thought provoking chills, the kind of which made The Babadook one of the best films of last year.

Insidious: Chapter 3 is paradoxically a prequel to Chapters 1+2, set several years before the events of the Lambert family and marks the directing debut of Melbourne’s own Leigh Whannell, who wrote the screenplay of all three installments (there’s also a cameo appearance of producer James Wan, who worked with Whannell on their breakout Saw). Although there isn’t a single original idea in this whole film, if you like spooky things-that-go-bump-in-the-night horror, this delivers exactly as promised.

After trying to make contact with her dead mother, Quinn (Stephanie Scott) tries to employ the help of a spiritual medium Elise (Lin Shaye from the first two) who refuses to use her gifts to play around with the paranormal and gives the warning, “if you call out to one of the dead, all of them can hear you”. Back at home with her widower father (Dermot Mulroney) strange things begin to happen as the forces that live in ‘The Further’ begin their malevolent games. Soon Elise is brought back into business when she realizes the seriousness that faces not only Quinn, but everyone around her. For fans of this series, the biggest story that Chapter 3 contributes is telling the backstory of Elise, why she became a paranormal investigator and how she began working with her two sidekicks Tucker and Specks (Whannell and Angus Sampson, both of whom are obviously having a lot of fun). 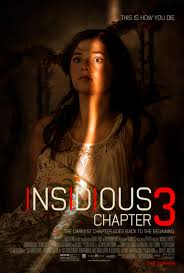 There a name for this type of horror film that was coined by critic Nigel Floyd: “Cattle Prod” cinema. Where everything goes quiet, the camera focus on the character’s worried face then BLAM with a jump scare, accompanied by a sound like the orchestra is having a consecutive stroke. Rinse and repeat at regular intervals. The last description that you’d ever give to an Insidious film is that it’s original, there is no idea here that hasn’t been done before and done better. But to his credit Whannell knows exactly how horror is supposed to work and while the scares are telegraphed a mile off, when they arrive they’re effective.

One of the best things about Chapter 3 is the obvious love that it has for the fan-base of this very profitable series. Elise was a fan favorite character who gets a fairly good back story here and there are quite a few Easter-eggs thrown in for those who’d like to find them. There’s even a brief appearance by the ‘Lipstick-Faced Demon’ who looks like Darth Maul is off his meds.  Just like Wan’s The Conjuring from 2013, this is like a ‘best of’ compilation of the horror genre, nothing you haven’t seen before but scary enough to make your heart start beating faster. Put simply: it works, nothing more and nothing less. If you want a few well conducted thrills and chills with a fairly decent script to tie it all together, it’s worth a look.

Insidious: Chapter 3 is in Australian cinemas from 16 July through Sony Pictures.

Written By
Simon Storey
More from Simon Storey
Not to be confused with Elle, the hard to watch rape revenge...
Read More