Over the years there have been umpteen adaptations of Gustave Flaubert’s classic novel Madame Bovary, going all the way back to 1932. It has been made into films, tv-miniseries, graphic novels, adapted in India, Portugal and even David Lean had a try back in 1970. It’s a piece of classic literature that has a reputation of being notoriously difficult to adapt into film and this attempt by director Sophie Barthes, who previously made Cold Souls with Paul Giamatti, fails to do much to spice up this drab and overall dull film.

Set in the beautiful Normandy region of France during the 1850s, the story concerns farmer’s daughter Emma (Mia Wasikowska) marrying the wealthy doctor Charles Bovary (Henry Lloyd-Hughes, with a wicked moustache) and starting life anew, enjoying all the spoils that come with marrying into money: clothes, high society and general snobbishness. Not long into their marriage, Emma gets bored of the overall mundanity of being a 19th century yuppie and tries to find something to fill the void which leads her to engage in several affairs and go on shopping sprees. These do nothing but further her depression and as her husband’s money runs out with more and more people being alienated from her life, the cycle of her dull existence can no longer continue.

Australia’s own Mia Wasikowska has been marking out quite a career for herself in the past few years and is quickly becoming known as one of the most promising actresses of her generation. In 2010 she proved more than capable of taking on classic literature with Cary Fukunaga’s beautiful adaptation of Jane Eyre, where she gave one of the best ever portrayals of the titular character. Unfortunately Madame Bovary is nowhere near as good as Jane Eyre and even more unfortunately isn’t a particularly good film on its own merits. There’s a common perception that period dramas have the tendency to be dull and self-important, Bovary fits the stereotype snuggly. 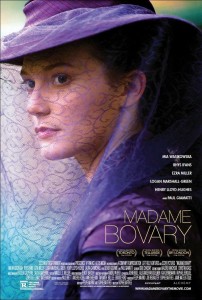 For a film that is all about passion and trying to find some release from the heroine’s boring and unfulfilled life, the film just becomes dull and passionless itself. Scene after scene of stilted, bland costume drama fall like dominoes one after the other with nothing to lighten the mood or make Emma the slightest bit likable. This is the main issue with the film – Madame Bovary has to be one of the most utterly unlikable characters in literature; she’s like a spoiled child wearing the skin of an adult, who has had everything she could ever want but still finds time to constantly complain about it, like Sex and the City 2 circa 19th century. The whole film is peppered with her bemoaning her lot in life and saying how bored she is, all the while she spends all her husband’s hard earned money and sleeps around. Not since Scarlett O’Hara has there been such an aggravating female lead character. It’s worth pointing out that none of this is due to the efforts of Wasikowska, whose performance is one of the best things about the film, it’s the character herself and it begs the question: Why on earth would we want to spend two hours with her?

This isn’t to say the film itself is bad, apart from the story and characters; Sophie Barthes has sculpted an exceptionally beautiful film to look at. The clothing is astonishing, Christian Gasc and Valérie Ranchoux who are both credited with the costume design will undoubtedly have an Oscar nomination in their future. This combined with the beautiful set design, formal cinematography by Andrij Parekh and some really good performances by Wasikowska, Henry Lloyd-Hughes and especially Paul Giamatti in a side role make this one of the best looking films of the year. Beautiful to look at, just not particularly nice to listen to.

If you like period dramas and you’re willing to put up with the contemptible main character Madame Bovary is worth seeing for the costumes and cinematography alone. The beautiful photography of the French countryside and production design are admirable but this is a film damned by being both numbingly dull and having plum-mouthed self-important dialogue delivered in a steadily swaying range of accents that verge on being pretentious. It finally commits the faux-pas of having a lead character so unlikable her eventual demise is welcomed with open arms.

Written By
Simon Storey
More from Simon Storey
One of the most interesting thing about The Wolfpack is the story...
Read More