The 1960s must have been a strange time in the world. Very strange. Judging by the literature and cinema that came out of this period of social upheaval it wasn’t all cigarettes, cocktails and adultery like Mad Men would have us believe and not even the hippy era of John Lennon’s long hair, LSD and complaining about ‘the Establishment’ that popular culture seems fixated on. Playing as part of Cinema Nova’s ‘Iconic’ line-up, Lindsay Anderson’s If… is considered one of the paramount films of the 60s counterculture movement and this  Palme d’Or winner from 1968 is a film that isn’t easy to comprehend, but unforgettable in its anarchically strange vision of the British boarding school system.

This was the first role of Malcolm McDowell, who Stanley Kubrick would eventually cement into popular culture when he cast him as Alex in A Clockwork Orange. He plays Mick, the leader of a group of friends returning for their penultimate year of school at a British public school in the tail end of the 1960s. The first challenge for any viewer who isn’t British is trying to figure out what half the class distinctions mean; ‘Prefects’ is pretty straight forward but how ‘Whips’, ‘Scum’ and ‘Fags’ differentiate is anyone’s guess. Anyway, If…’s plot isn’t easy to summarise, no surrealist film is, but it primarily concerns a group of friends led by Mick as they go through the motions of their final year of school and grapple with the huge list of traditions in the British school system and try to figure out what they want to do with their lives. But this is of course the 1960s where new ideas were running riot, quite literally, so instead of drinking tea and saluting the Queen like any good Son of the Empire should, they rebel against the authority of the teachers and discuss topics like anarchy and revolution with lines like “one man can change the world with a bullet in the right place”. They also sneak off one day, steal a motorbike and get in adventures with a young lady that we only know as “The Girl”. 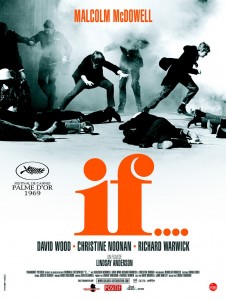 One of the most memorable parts of this memorable film is the setting,  the giant gothic cathedral where the boys go to school is nothing short of breathtaking, and is captured beautifully by cinematographer Miroslav Ondicek. This combined with the score that hovers over most scenes would have to make it one of the best looking and sounding British films of this era. Malcolm McDowell holds himself very well, it’s obvious to see why he caught Kubrick’s eye with this film and why he has gone on to make such an amazing career.

Being a work of surrealism in the 60s, it goes without saying that there are parts of If… that are flat out strange but it’s all the more endearing for it. It’s a fascinating portrayal of the very British setting of a boy’s only boarding school and reflection on the era it’s from. This is the kind of film that is worth at least a second watch to try and figure out what it’s all about and as it descends into the nihilistic final act when it takes a very dark surrealist turn what the film is supposed to be about is anyone’s guess, but it’s a fun ride none-the-less.

Written By
Simon Storey
More from Simon Storey
Think of animation and you think of Studio Ghibli, the Japanese studio...
Read More