Seth MacFarlane likes to play with fire when it comes to comedy, as proved time and time again in his hit animated series, Family Guy. After the success of 2012’s Ted, the pot-smoking, shit-talking teddy bear returns once more, and he ain’t no Paddington. Ted 2, like its predecessor, is not for the easily offended. But if you think dudes sharing a penis-shaped bong is utterly hilarious, then it may be right up your alley.

Ted 2’s storyline is mediocre at best, and while there seemed to be an attempt at an underlying message about civil rights, this wasn’t quite pulled off. After they get married, Ted and his Boston babe, Tami-Lynn (Jessica Barth), hit a road-block when they attempt to adopt. For despite his integration into the human world, Ted is not legally considered ‘a person’ (Woah, woah WOAH, did NOT see that one coming!) They take the state to court, with newbie lawyer, Samantha L. Jackon (Amanda Seyfried) assigned to their case. Sparks fly between her and Ted’s best friend John (Mark Wahlberg) who is recently divorced following a failed marriage (read: Mila Kunis wasn’t available for the sequel). But this girl is a fellow pothead so she could just be THE ONE.

Much of the first Ted film is recycled in the second. The climax is extremely similar, however this time it is set at Comic Con which affords a few extra laughs. Donny (Giovanni Ribisi) is back to wreak havoc, pot is smoked, and Ted and John bond by beating each other up. Throw in some spilt semen, a few cameos, and some considerably mundane court scenes, and you’ve got yourself a sequel. The storyline was never the main drawcard though.

There are plenty of opportunities to laugh your socks off in the screenplay by MacFarlane, Alec Sulkin, and Wellesley Wild (the trio responsible for A Million Ways to Die in the West). However, Ted involves a very specific sense of humour. There are jizz and dick jokes galore, and occasionally the writers come close to crossing the line (one whole segment just screams “TOO SOON!”). Though the film does produce plenty of laughs, few of the jokes are overly memorable. It must be said though, that jokes about Amanda Seyfried’s huge eyes never get old. But it does make you wonder what Seth MacFarlane will do if he ever ends up with Emma Stone in one of his films. 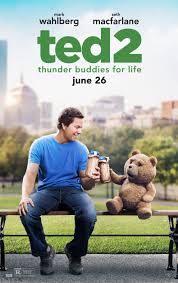 Mark Wahlberg proves again that he’s capable of comedy, but it doesn’t feel like he needs to try that hard to play a Bostonite man-child. Amanda Seyfried doesn’t exactly stretch her range either, but she’s still enjoyable to watch and her singing around the campfire is surprisingly pleasing to the ear (more so than her turn in Les Mis). Jessica Barth as Tami-Lynn meanwhile manages to make tacky-chic likeable, and that is one hell of an accomplishment.

Seth MacFarlane does more voice work as Ted, but it’s no match for his Family Guy cohort of Peter, Stewie, Brian and Quagmire who all remain infinitely funnier. Whether this is the writing or the format is still up for debate. MacFarlane’s three live action feature films have never quite matched the heights of Family Guy or even American Dad. Is this because animation can simply get away with more? Or is it that MacFarlane can’t pad out a two hour movie with the requisite serious moments without boring his audience? The best part of the film was the opening credits, in which MacFarlane’s love for Broadway was clear in a big showy dance number. Alas, there were no humorous lyrics to accompany it, making this the second time where he unfairly teases those audience members hoping for some of that old MacFarlane musical pizzazz (the moustache number in A Million Ways to Die in the West was a cop-out by his standards).

Even if it doesn’t quite hit the mark, there is still some value in Ted 2. There’s a place for crass humour, and those familiar with MacFarlane’s repertoire shouldn’t be too shocked. If you go in expecting the MacFarlane magic we’re so used to in his television work, you may be disappointed. But if you have enjoyed his previous film work, it’s certainly bearable.

Ted 2 is in Australian cinemas from 25 June through Universal Pictures.