Thanks to Madman Films, we’re giving away 5 doubles passes to the new film GOING CLEAR: SCIENTOLOGY AND THE PRISON OF BELIEF, in cinemas from Thursday 18 June. 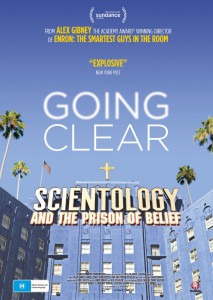 Film Synopsis: Written and directed by Academy Award® winner Alex Gibney and based on the book by Pulitzer Prize winner Lawrence Wright, GOING CLEAR: SCIENTOLOGY AND THE PRISON OF BELIEF is a provocative tale of ego, exploitation and lust for power. The film profiles eight former members of the Church of Scientology, whose most prominent adherents include A-list Hollywood celebrities, shining a light on how the church cultivates true believers, detailing their experiences and what they are willing to do in the name of religion.

Written By
Film Blerg
More from Film Blerg
Ocean's Eleven is definitely a five-star and an outstanding movie. For the...
Read More