Brad Bird’s film has strong bookends, opening with an innovative concept and concluding with a compelling political message. It’s what happens during the 100 minutes in the middle that messes things up. Instead of giving us a profound science fiction picture, Bird leaves us watching George Clooney and two young girls scamper around the universe in a National Treasure-cum-Spy Kids frenzy. 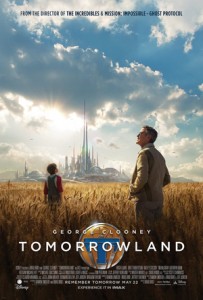 Frank Walker (Clooney) and Casey Newon (Britt Robertson) are our two protagonists, each of whom has had the privilege of visiting the mysterious Tomorrowland. At the beginning of the film, their respective journeys give us a peephole into this rabbit hole, and it’s pretty spectacular. So spectacular, in fact, that Casey spends the remainder of the film trying to find a way back in. The audience may find themselves empathising with Casey, yet the sadistic filmmakers have other ideas, expressing a preference for explosions, apocalyptic visions, and impaled robotic heads.

To pad things out a bit, getting back into Tomorrowland is easier said than done for Frank, Casey, and Athena (Raffey Cassidy), their ‘recruiter’. Among other things, they steal a car, obliterate an army of robocops, and blow up the Eiffel Tower. There’s no substance to any of this, other than exhausting the special effects budget. Such carnage may appeal to teens, but it is likely to disappoint older audiences, lured in by the time-travel-shaped carrot Bird dangles in front of his audience.

Given the film’s appetite for destruction, it’s remarkable that they got away with a PG rating. In many ways it’s fitting, because Tomorrowland is a childish film. Just like the short stories you used to write when you were ten, the film builds artificial suspense by intentionally withholding critical plot elements. While this does well to create intrigue early on, the writers’ insistence on being coy works to the film’s disadvantage. By the time George Clooney reveals to us what’s going on, we’re 90 minutes into the film and have lost interest.

All of these flaws point to Tomorrowland’s biggest problem – it’s too long. In trying to present itself as a modern day epic, it wastes a good idea by padding it with too much visual collateral, superfluous tangents, and emotional baggage.

Tomorrowland is in Australian cinemas from 28 May through Disney.

Written By
Kevin Hawkins
More from Kevin Hawkins
Hollywood's obsession with the undead has become an international epidemic, with New...
Read More