With a new Madame Bovary set to hit screens in a couple of months, Australian audiences are first treated to a French rendering of the tale, set in the current day. Based on Posy Simmonds’ graphic novel of the same name, Gemma Bovery puts a contemporary and self-referential spin on the Gustave Flaubert classic.

Martin (Fabrice Luchini) is an ex-Parisian living in a village in Normandy with his wife and son. When a British couple by the names of Charles and Gemma Bovery move in across the street, Martin is transfixed by their apparent connection to Flaubert’s literary heroes. He is particularly taken by Gemma (Gemma Arterton), whom he follows and who appears to be treading a very familiar path to the tragic Emma Bovary, whose life ended in suicide. Determined to change her narrative, he intrudes on her private life. But is she fated for a tragic ending? 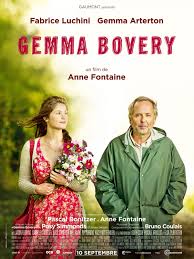 While Martin could easily be portrayed as a lecherous old bastard who takes more than a few glances at Gemma’s ample cleavage, Fabrice Luchini is just too adorable to offend. Though he’s much older, Martin regards Gemma as would a schoolboy – their awkward interactions almost cute. Gemma Arterton successfully embodies the complexities of Mrs Bovery, who seesaws between hope and despair. All at once she is the picture of confidence, whilst also a desperate, drowning figure.

Anne Fontaine (who directed the compelling Australian drama Adoration) delivers an interesting film that plays with the idea of storytelling. The screenplay, co-written by Fontaine and Pascal Bonitzer, handles the notion of fate in a clever way, and incorporates red herrings based on Martin’s preconceptions of Gemma’s narrative. Apparent flaws of the film could even be seen as deliberate attempts to play with this aspect further. For example, the film seems to dawdle on its way to a clever conclusion, but this echoes Martin’s explanation to Gemma that Madame Bovary is quite uneventful. Furthermore, with the exception of Jason Flemyng as Charles, the actors playing Gemma’s two other lovers, – Niels Schneider as Hervé de Bressigny and Mel Raido as Patrick – are rather blah. But maybe that’s the point. Gemma is never fully satisfied. Unfortunately, neither is the viewer.

Gemma Bovery is in Australian cinemas from 28 May through Regency.