Posing as a photographer, a lone horseman rides into a remote village somewhere in the Austrian Alps. Going simply by the name Greider (Sam Riley) and unaffected by a hostile unwelcome from the locals, he takes long-term accommodation with a Widow named Gaderin (Carmen Gratl) and her daughter Luzi (Paula Beer, also the film’s narrator). Greider soon discovers the quiet town is firmly under the control of an elder man named Old Brenner (Hans-Michael Rehberg) and his six equally power hungry Sons. However, once the deep winter sets in the Brenner bodies start dropping and Greider’s cunningly vengeful motives are revealed.

Based on the 2010 best-selling novel by Thomas Willmann, and adapted by Director/Writer Andreas Prochaska and Co-Writer Martin Ambrosh, The Dark Valley (Das finstere Tal) shares similarities with many previous Hollywood Westerns. It’s an aspect that will be hindering for many people, particularly due to the film’s melodramatic nature. With familiar nasty villains and the archetypal hero justified in his methods of revenge, accompanied by pitiful and powerless female characters. The Dark Valley seems set out to tick all the boxes of familiar characterization within a revenge Western and develops very little beyond this. 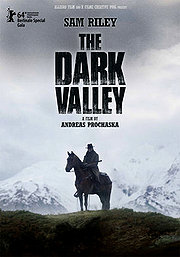 Regardless, this doesn’t take away from the films excellent performances. Sam Riley, will no doubt strike some as the familiar face that you can’t quite place. Disguised by his German tongue, British-born Riley’s previous films include starring in the Ian Curtis biopic Control, and as Pinkie, in the Mod-tastic Brighton Rock. The Dark Valley has strong overtones, which resemble some of Clint Eastwood’s most memorable Westerns most notably, High Plains Drifter.

Riley helms this film with quiet poise and determined confidence. Supporting performances are equally accurate, with Rehberg, Beer and Gratl successfully fulfilling the requirements of their characters, particularly Beer and Gratl whose roles are considerably restricted.

The German-Austrian co-production is where The Dark Valley develops unique qualities. Stunning Cinematography from Thomas W. Kiennast gives depth to the films gloomy, mysterious alpine surroundings, creating a mythical atmosphere with its dark woods and snow-capped mountains. Incorporated with Kiennast’s cinematography is Matthais Weber’s brooding score, at times deviating into an edgier territory, it ultimately sustains the film’s somber mood.

The film is no original rendition of a Western, since much of what unfolds has come before. However, The Dark Valley makes an adequate reference to some of the classics of the genre, so it’s not entirely void of some recognition. Taking the Western’s most effective element of revenge and serving it appropriately cold, against the bitter Austrian winter.

The Dark Valley is screening as part of the 2015 Audi Festival of German Films.