WWI. Inarguably the greatest moral atrocity committed during a period of great moral atrocities was the genocide of the Armenians by the Ottoman Empire. With it’s historical enemy Russia closing down upon it’s northern borders, fearing betrayal within their territory from the oldest Christian people in the world, the Armenian people, the Turks decimate their population. Historians estimate 500 000 to 1.5 million Armenians died in death marches through the desert. Fast forward one century and it is illegal to even talk of the event within Turkey. So when highly talented, ethnically Turkish director Fatih Akin pulls legendary Armenian screenwriter and early Scorsese partner Mardik Martin (Raging Bull, Mean Streets) out of a 34 year retirement, you would expect an explosive, gut wrenching, highly emotional result bearing light on the 100 year old heinous injustice hidden under the rug of the Turkish government. Does the film deliver this? Well, sort of.

The film begins when blacksmith Nazaret Manoogian (Tahar Rahim) is taken at night, despite bribery, by Turkish officers from his adoring family. He and a few fellow Armenians from his township are subjected to brutality and forced to do hard labor. After marching for days on empty stomachs they are given the option of converting to Islam. A desperate few betray their faith, while the rest are forced to continue marching. With a jerk the officer halts the march, forces the men onto their knees and has each man under his control slice the throat of every hostage. Nazaret’s captor however stalls in the act. Unable to take a man’s life until he is forced at gun point. He inserts the knife clumsily and Nazaret falls to the ground. Later the would be executioner returns at night reviving Nazaret, he begs forgiveness. Nazaret accepts and they escape together, though Nazaret has now been rendered mute from his mutilation. Soon after this he learns of his family’s death from his frail sister in law he finds in a death camp, in a scene that shows her so decrepit it is hard not to recoil from the screen. Weakly that night she begs again and again with her last energy for him to end her life as well. 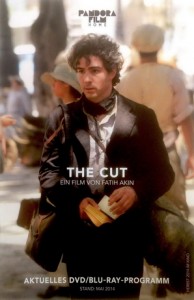 After surviving the war in a way, not dissimilar to a few Jewish refugees under a Hitler occupied Europe, Nazaret learns that his twin daughters may very well be alive. This is where the film changes pace dramatically. What was one man’s story of desolation now transforms into a journey as epic as Homer’s Odyssey. A hero desperate to reunite with his loved ones. Nazaret’s journey spans continents and many years. Martin and Akin make an interesting choice, this primarily English speaking film could easily have focused entirely within Nazaret’s homeland, wringing out emotion and squeezing every last drop of empathy from their audience. Instead they challenge the preconceptions of the viewer. Akin isn’t out to make a soul drowning emotional affair, which is a brave choice given the subject matter. His hero transforms from a likable relatable character to someone of tragic and noble fortitude he would not be amiss in any classic Greek tale. Unwavering in his resolve. Being battered physically and internally, he is driven only by a small sliver of hope only he can see. Tahar Rahim delivers a phenomenal performance. One scene stands out above the rest, during a Charlie Chaplin film Rahim’s eyes display such longing and despair it brings out a moment of frisson. It’s almost the highlight of the film, along with the superb ending.

So what is The Cut? It is an order from a Turkish soldier to his soldier to execute. It is what renders a man a mute. It is the schism that tears a family apart. Those wanting to see a film bringing to light a genocide out of global apathy and Turkish denial will probably not be satisfied with this picture. But on a cinematic scale The Cut shines.

The Cut is screening at the 2015 Audi Festival of German Film.

Written By
Ben Isbel
More from Ben Isbel
Dark Waters is based on an illuminating New York Times article about...
Read More