A great many science fiction stories have wrestled with the idea of artificial intelligence. In the case of the recent Battlestar Galactica reboot, and the soon to return Terminator franchise, it’s a threat of a catastrophic nature. But subtlety can also be present, as with the artificial intelligences of Philip K. Dick’s Do Androids Dream of Electric Sheep (filmed as Blade Runner) in which the artificial life forms are a threat on a different level; more human than human as the Tyrrel company motto goes. Virtually indistinguishable from humans, only a machine can detect their true natures, an irony which is mirrored in Ex Machina by writer/director Alex Garland.

The core conceit of the movie is the idea of the Turing test, proposed by mathematician Alan Turing to distinguish artificial machines from humans. It is to be Domhnall Gleeson (Caleb) who acts as human judge to Alicia Vikander’s artificial intelligence, Ava.

Caleb learns that far from being a machine, Ava is far too human for comfort, so much so that with the addition of a hair piece and dress, his human emotions are clouded by her feminine beauty. 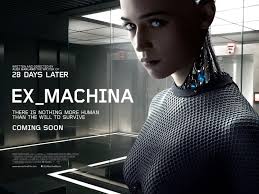 In this way, Ava is a cipher, used by Nathan (Oscar Isaac) to test both her and Caleb. She is not the first, and won’t be the last of her line, she is a throwaway, a tool to be tested and deemed worthy or thrown on the scrapheap.

But more than that, she is a metaphor for the idea that women are constructed and held back from greatness by their male counterparts. That the glass in the story is an unbreakable wall rather than ceiling is merely a semantic difference, and the possibility that she will escape this prison, has driven Nathan to extremes; he’s constructed his home come lab in the wilds of Alaska, far from humanity and only accessible via helicopter. Doors are controlled by computers, and Caleb is provided a card which opens only some doors but not others; certainly not Ava’s prison. When the power goes out, these doors lock-down, ostensibly to prevent theft, but as the story unfolds, it becomes clear it’s to keep the genie in the bottle, the god in the machine (the Deus Ex Machina of the movie’s title). Nathan fears artificial intelligence will replace humanity and remarks AI will look back upon homo sapien like we look back upon the bones of our ancestors.

Like Duncan Jones’ Moon, Ex Machina holds the attention and suspense precisely because of its tight writing and small cast, the focus on three protagonists instead of a cast of thousands. And like Moon, the science-fiction story plays out as a complex morality tale.

Issac’s portrayal of Nathan treads a fine line between high functioning sociopath and concerned fellow human and his portrayal reminds one of a machiavellian manipulator, using moral expediency to further his goals. In this he ironically becomes the least human, certainly least sympathetic, of the protagonists. His emotional control over both Caleb and Ava causes enough doubt to create the circumstances for the final act.

On the other hand Ava has much more self-awareness than either realises. Alicia Vikander’s portrayal initially falls into the so-called “uncanny valley” of the artificial made to look real, missing some vague yet important quality. This is in no small part thanks to the impressive make-up design by Sian Grigg, and Richard Conway who heads up the SFX department and a massive number of visual effects artists. Their work gives Ava her “artificial” face and transparent body. But it is Vikander’s performance that seals the deal. She moves Ava subtlely between the vulnerable and mechanistic, and her expressive portrayal immediately reminds one of Summer Glau (River Tam), in Joss Whedon’s Serenity. The deliberateness of her movements suggests something not quite right, not quite human.

In the end though, the battle of wits between Ava and Nathan would be nothing if not for Gleeson’s fish-out-of-water. Caleb is thrown in the deep end, brought to meet the CEO of his company and no-doubt expecting pizza, programming and computer-games. Over the course of the movie we can see him grappling moral and ethical dilemmas that Nathan so easily ignores, and indeed dismisses in his guest. Gleeson’s portrayal of the young computer engineer shows his decisions weighing upon him, and that there is no black and white where consciousness is concerned.

Rather than relying on vast empires, and underdogs fighting Nazi’s from space, Ex Machina is a story in the classic style of science-fiction, one which asks big questions and dissects what it is to be human. It covers an enormous amount of ground and is definitely worth a re-watch.

Ex Machina is in Australian cinemas from 7 May through Roadshow.

Written By
Lisa Sinclair
More from Lisa Sinclair
It's all hands on deck for this week's episode, with the Leda...
Read More