There’s something very cold about classical choirs. Is it the discipline? The lack of warmth in the traditional venues they perform in? Or the history of abuse against choirboys? Of course not everyone would share this sentiment, but for some, Boychoir may not quite seem the feel-good film it’s been made out to be. Though the warm and fuzzies may be muted, the film does, however, contain an uplifting story at its core.

Stet (Garrett Wareing) is an eleven year old rebel with a vocal gift. After his single mother is killed in a car accident, his biological father Gerard (Josh Lucas) foots the bill for the illustrious American Boychoir School. With food and board provided, Stet will remain out of sight, out of mind, and Gerard’s wife will remain none the wiser of his indiscretion eleven years earlier. Stet struggles to adapt to the rigid discipline of his new school, leaving choirmaster Carvelle (Dustin Hoffman) unimpressed with his behaviour. He is, however, aware that Stet has a gift, and it is one that is only temporary.

Viewers may find themselves wondering what the point is of pursuing the Boychoir dream when it can only last so long. These boys’ voices will break soon enough, and they’re giving up a normal education for something that most likely won’t lead to a career. This question is answered in the later stages of the film, and there is a valuable lesson about seizing the moment. However, the future of the boys remains frustratingly unclear. There is some small glimpse by way of the adult teaching staff though this remains somewhat depressing, bringing to mind the old adage, “Those who can’t do, teach”. All seem filled with regret, left to live vicariously through their students. 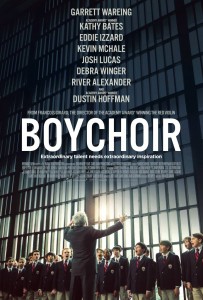 The story as told by screenwriter Ben Ripley is a moving one, even if it does contain a few flaws. The character of Carvelle is frustratingly inconsistent, and there is a mixed message about consequences and second chances for children. Furthermore, the storyline concerning Stet’s father is a little weak, if still affecting. It comes to a thoroughly predictable conclusion, though that won’t necessarily stop viewers from choking up.

In terms of casting, Boychoir achieves flying colours. Though Hoffman’s character is inconsistent, he gives it his best and is as wonderful as ever, while Kathy Bates provides humour and warmth in an otherwise cold setting. Eddie Izzard is unrecognisable as a snooty British teacher, who is balanced out nicely by Glee’s Kevin McHale (HE CAN WALK!) as a young teacher who instigates Stet’s progress into the upper ranks of the choir. Garrett Wareing makes a convincing transition from little brat to someone you can root for, although he isn’t really singing. Dubbed by singer Benjamin P. Wenzelberg, this removes the worrying question of what would have happened if the actor’s voice had broken during filming. The choirboys amp up the private school boy snobbery to (potentially unintended) comedic degrees, with Joe West deliciously nasty as Stet’s biggest competition. He even wears a hoodie in one scene, to let us know he’s all about the #thuglife when it comes to getting the part of lead soprano.

The voice of a pre-pubescent boy seems almost the very definition of innocence, and Boychoir certainly milks the troubled young boy finding his way angle for all it is worth. But some would argue that François Girard’s film is almost a bit too innocent. The American Boychoir School is reportedly a fictionalised version of the New Jersey school of the same name, with its staff members making up part of the film’s crew, and its students appearing as extras. This school has previously faced multiple lawsuits concerning sexual abuse which occurred over three decades (up until the 90s), however there is no suggestion of abuse in the film. Some consider the Hollywood fairy-tale treatment of the choir to be insensitive to the experiences of now grown men who continue to suffer as a result of their treatment by past members of the school’s staff. And so it begs the question, do filmmakers have a responsibility to address the darker aspects of an institution, even when creating a fictionalised version? Do they owe it to the survivors of childhood sexual abuse to acknowledge their suffering? Or can we not just appreciate a film that focuses on the positives of a school in its current day?

Should viewers be aware of the real American Boychoir School’s history before passing judgment on its merits as a film? It is a delicate issue, though Girard and Ripley have never (as far as this reviewer is aware) laid claim to the film being a realistic portrayal. While it’s certainly arguable that the school upon which the film is (loosely) based may not deserve the plaudits it may receive from a potentially uninformed audience, the film is worthy of respect. Uplifting stories like these may not always be rooted in reality, but that’s the beauty of cinema.

Boychoir is in Australian cinemas from 30 April through Becker Film Group.