Raphael (Rickson Tevez), a Brazilian street teenager, spends his days sifting through mountains of trash in the hopes of finding something valuable. One day he finds a wallet containing money and other documents, and pockets the lot. Soon after, the police arrive, advertising a reward for anyone who can find the wallet. Though his friend Rato (Gabriel Weinstein) suggests they hand it in, Raphael suspects that there is more to the wallet than the authorities are letting on. So begins a daring and dangerous adventure that reveals the extent of corruption within government and law enforcement agencies.

Trash is based on the book of the same name by Andy Mulligan. Though he was inspired by his time spent in the Philippines, his novel never specifies its location. Mulligan reportedly didn’t want to criticise a single nation, but rather point out the inequalities that persist in various countries where corruption is rife. The film, conversely, is set in Brazil, and it remains to be seen whether audiences come away with a negative opinion about South America specifically, or with a broader appreciation of a widespread problem. Either way, the corruption on display is disheartening to say the least. An American priest (Martin Sheen) has tried in vain to fight the system, becoming increasingly embittered in the process. International aid worker, Olivia (Rooney Mara) perhaps has a little more faith, but remains unsure of how to facilitate lasting change. It is the three boys – Raphael, Rato and Gardo (Eduardo Luis) who provide the true, innocent spark of hope. Though their understanding of the bigger picture is limited, they are able to shake up the system. 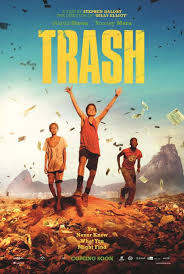 Seeing this story through the eyes of children is what propels Trash ahead of so many other films that have dealt with corruption in law and politics. This allows the story to be told in simple terms, and is all the more affecting when children are the targets of violence. Though clearly independent and rebellious kids, their innocence is still evident, and their unwavering loyalty to their friends is nothing short of beautiful. The three young non-actors cast are very convincing, especially young Rickson Tevez who lights up the screen.

Stephen Daldry’s previous films (Billy Elliot, The Hours, The Reader, Extremely Loud and Incredibly Close) have all managed to score at least one of a best director or best picture Oscar nod. With his first foreign language feature, that streak may be coming to an end, though that’s not to say it is a weak film. While Daldry’s films are usually sure-fire hits, Trash sneaks under the radar into Australian cinemas this week without so much of a squeak. While you could blame this on its producers not trusting the public to embrace foreign language films, it’s perhaps more likely that the film’s bilingual nature (it is spoken mostly in Portuguese, but also involves English language) has created confusion about how exactly to market it. Indeed, some viewers’ expectations may not be met if all they know is that it involves two big names in Martin Sheen and Rooney Mara – who are both supporting characters, not leads. It’s a shame that Trash will only have a limited reach in Australia, because it deserves better than to be treated like… well, you know.

Richard Curtis was tasked with adapting Mulligan’s book for the screen, and Trash signals a departure from his usual material, which includes Love Actually, Notting Hill, Four Weddings and a Funeral and Mr. Bean. Though there’s a minor spattering of jokes throughout the film, the biggest criticism that can be levelled at Trash is that it’s just too serious. Despite the cheeky demeanour of the boys, Trash is a hard slog that offers little in the way of reprieve until very late on in the piece. Though it’s not exactly a sunshine and lollipops type of film, the lack of comedy given Curtis’ involvement feels unusual. While both Daldry and Curtis should be commended for expanding their repertoire, their involvement may result in further clashes with viewer expectations.

Perhaps the best way to enjoy Trash is to forgo all expectations surrounding its creative team, casting, and spoken language. However, it must be acknowledged that without the impressive names associated with it, Trash may not have even made it to our screens at all.  If you can focus all energy instead on its story and message, you may find that Trash is indeed a treasure.

Trash is in Australian cinemas from 30 April through Universal Pictures.