Based on the urban legend that a Japanese tourist froze to death in Minnesota while searching for the loot of cash that goes undiscovered at the end of the Coen Brothers’ seminal masterpiece Fargo (the real life woman who actually inspired the tale committed suicide), Kumiko, the Treasure Hunter is one of the most audaciously original character pieces to come out of the American cinema in years.

Following the structure of Werner Herzog’s similar film of alienation and the effects of mental illness, Strozek, Kumiko follows its title character (played by Rinko Kikuchi) through a two act structure; the first in her native Japan while she concocts her idea to find the hidden treasure based on finding a VHS copy of Fargo, and the second which follows her travels in America as she goes searching for it. The first half introduces us to her lonely life where she is routinely subject to ridicule and harassment from her mother (Yumiko Hioki) and boss (Nobuyuki Katsube), a Japanese businessman, who both want her to follow traditionally prescribed paths in her life, such as settling down with a family or pursuing a career. Driven to the edge and obsessed with the treasure, she steals her Boss’s credit card and journeys across America, meeting well-meaning, but thoroughly inept people along the way. 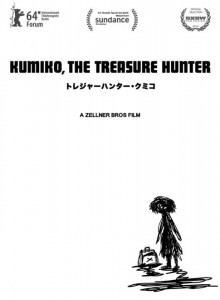 As Kumiko, Kikuchi gives a performance of incredible complexity. She captures all the hurt and pain of a woman struggling to forge her own place in life, while pursuing her insane dream. It is no small feat on her behalf that we believe her motivations and even come to root for her to find her treasure. Her brilliance continues into the second half of the film when her language barrier leads to several awkward encounters and misunderstandings with the people who just want to help her.

Directed by David Zellner (who also appears in the film as the policeman who comes to Kumiko’s aid, and who also co-wrote with his brother Nathan Zellner), the film is perfectly executed, particularly considering its potential to simply coast by on its interesting and unusual premise. They create a fully evolved world which is entirely specific to Kumiko’s plight, and creates some incredible moments of dark levity throughout. They embrace the humour implicit in the story entirely and create a surprisingly fulfilling narrative.

This is idiosyncratic filmmaking which doesn’t compromise its originality in pursuit of its masterfulness; and it succeeds entirely. A one of a kind masterpiece, which also features one of the best film endings in years, this cannot come recommended enough.

Kumiko, The Treasure Hunter is in Australian cinemas from 30 April through Palace Films.

Written By
Chris Smith
More from Chris Smith
Set in the very near future, How I Live Now depicts the...
Read More