It’s good that there’s been a year between season two and three because it means there’s been time to digest the story so-far, and to get one’s head around the twisting tale of BBC America’s Orphan Black, the adventures of Sarah Manning (Tatiana Maslany) and her many sisters.

The recap sets things out: Helena, one of Sarah’s sisters, has been kidnapped by the military; Paul Dierden (Dylan Bruce) did a deal with Siobhan (Maria Doyle Kennedy) — Sarah’s adoptive mother — to get Sarah and Kira out of the clutches of the DYAD institute. Rachel, one of Sarah’s sisters, is in a bad way after having a pen inserted via high-pressure hose into her eye, and Cosima, sister three, has discovered hidden research from Ethan Duncan (Andrew Gilles), father of the project.

In Season three, the writers, not satisfied with two seasons of twisting storyline, have added another element. Project Castor gives Orphan Black a new enemy, and are carry-over champs from season two. It’s high military, super-secret and known only to a few, including Dr. Marian Bowles (Michelle Forbes) who heads-up DYAD’s administrative body, the appropriately named Topside. 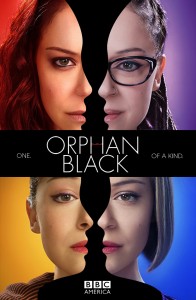 The writers of this episode (and creators of the show) Graeme Manson and John Fawcett, amp up the weird from the moment the story begins, with a pregnant Helena first being attended to by her three sisters in an idealised setting, and then being harassed by a talking scorpion. But she’s the crazy one, so that’s all part of her charm.

Sarah and half-brother Felix (Jordan Gavaris) are on the riverfront when the story begins proper. Daughter Kira (Skyler Wexler) is playing amongst the reeds when trouble arrives in the form of Delphine (Evelyne Brochu), sister Cosima’s watcher (and lover) from LEDA. Trouble is brewing (when isn’t it?) for the sisters and she needs Sarah’s help.

There are moments in this episode which feel a little on the soap-opera side, possibly because of the criss-crossing plot lines and twists. As funny as they can be, Alison and Donnie’s storyline seems inserted for the sake of it rather than being an integral part of the overall story. They lend a dull suburban reality to the tale and it’s sometimes jarring going from Sarah’s strengths and fight, the intrigue of the LEDA institute over to soccer moms, local politics and the home life. Add to this the quick moments of plot cutting between Donnie and Alison at the soccer pitch to Castor (Ari Millen) beating up Siobhan (Maria Doyle Kennedy) for no apparent reason, to Cosima being dumped by the aforementioned Delphine and you have a story that feels a little rushed.

True Blood did this a lot in the final seasons, and one hopes Orphan Black doesn’t degenerate to this level. Compressing the storyline to 10 episodes might save money, but if the writers and producers aren’t careful, it’ll alienate viewers by preventing them from spending enough time with characters to actually care about them.

Ultimately, the “A” story is the one that matters, and that’s all about the sisters and their new brothers, products of Project Castor. When the story focuses on this, it works best, and there’s a sense of real jeopardy.

So, onward to episode two, next week.

Orphan Black is airing on SBS and Netflix Australia.

Written By
Lisa Sinclair
More from Lisa Sinclair
It's good that there's been a year between season two and three...
Read More