Bringing their dating relationship to the next level, teenager Jay (Maika Monroe) and Hugh (Jake Weary) decide to have sex. After this seemingly innocent and carefree encounter, Hugh informs Jay that he has now passed a curse onto her. One that only the cursed and the curser can see. Manifesting itself in the form of a relentless stalking stranger who is continually changing form. ‘It’ will never stop pursuing Jay unless she passes the curse onto someone else or ends up being killed.

It Follows is set in a post-millennium Detroit but with props and references from alternate decades, which gives the film a unique and indeterminate setting. This includes, cell phones, black and white televisions, cars from the seventies, and a late eighties/early nineties vibe, all coexisting in a dreamlike state.

Written and Directed by David Robert Mitchell, whose previous work The Myth of the American Sleepover another film portraying teenagers in Detroit, sought to separate itself from the over the top Apatow produced comedies about American adolescents. A refreshing change of direction, but a film that aimed for normality but achieved mundanity. It Follows is a step up for Mitchell with the characters feeling much more familiar and coming through in smaller, defined measures. These measures help keep the films pace, for whenever Jay and her friends are stationary, the clock starts ticking and tension mounts as to how long it will take the entity to find her again. 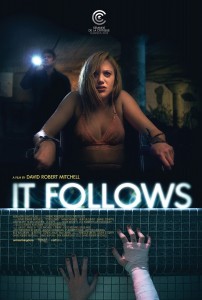 Rich Vreeland, going under the recording name of Disasterpiece, creates a score full of suspense and is an aspect of the film that has divided its audience. Some have found it jarring and overbearing, while others have praised it and compared it to more recent popular soundtracks, such as Drive. Vreeland’s score is a great homage to some of the classic John Carpenter scores of the late 70’s and early 80’s. However, he is able to avoid a direct tongue in cheek duplicate of Carpenter’s work while referencing creepy, minimalistic synth tones to strong effect.

In conjunction with the film’s score is the cinematography of Mike Gioulakis, whose favourable wide shots are not only well crafted, but also a welcomed change from the handheld, found footage style that’s become popular in recent years. Gioulakis has recognised the eerie impact wide shots of suburbia can have. In particular, when an unknown individual is constantly following you and lurking in the background. Again conclusions can be drawn back to Carpenter’s Halloween, yet shots for It Follows are used so sparingly and effectively that they avoid any misuse.

Issues with It Follows derive mainly from the story. With the film ending on an ambiguous note, other questions that weren’t addressed come to mind. No mention is made of whether the curse can be spread via same-sex relations, which isolates not only the number of potential victims, but a potential audience as well. Its answer could be assumed but is never mentioned.

The premise of the film seems to be embedded in a deep fear of STDs and teenage sex, the latter of which has been the underlying theme for many classic horror films. Choices made by the characters in It Follows fall under the typical, tear your hair out, why would you do that, type scenarios. However, it is difficult to tell whether Mitchell is merely playing on these concepts and fears or is using them as a legitimate framework for the story.

The film’s climax is where It Follows feels most underwhelming. The location seems to have been chosen based on aesthetics and limits the actions carried out by Jay to finally face the stalking demon. In comparison to much of the building tension leading up to this moment, the payoff seems a little droll.

It Follows isn’t quite the horror it’s been hyped up to be, but it’s a welcomed change from the thoughtless and repetitious horror films that litter the modern day horror genre.

It Follows is in Australian cinemas from April 16 through Rialto Distribution.

Written By
Edward Curtis
More from Edward Curtis
You know when you have one of those bad days? One where...
Read More