Tracing the life and career of renowned photographer Sebastião Salgado from his childhood in Brazil through to his most recent collection “Genesis” which saw him travel the whole world in pursuit of life at its purest forms, The Salt of the Earth is a never less than absorbing portrait of one of the world’s great artists.

Like Werner Herzog, his fellow peer of the German New Wave, Wim Wenders (who co-directs here with Juliano Ribeiro Salgado – Sebastião’s son) has made a career bouncing back and forth between fictional features and documentary work, always in pursuit of interesting and idiosyncratic material, of which this definitely applies – Salgado is an entirely unique soul who’s vision of humanity is truly one of a kind. From the war torn parts of Africa in the eighties and nineties, like Ethiopia and then Rwanda, to the tribes of Indonesia, his ability to capture life at its most basic is unquestionable.

In dealing with someone who has spent large portions of his life documenting human suffering, the film by necessity becomes bleak as the toll on Salgado’s soul is explored. His work from Ethiopia, featuring bodies both alive and dead deprived of all food and sustenance, and then of mutilated victims from civil war in Rwanda, is not for the faint of heart, but also necessary for appreciating the artists view of humanity, and indeed as he says, for understanding humanity as a whole. 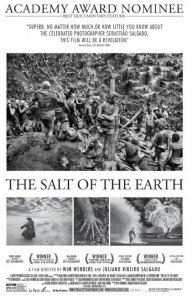 Shot mostly in high contrast black and white to echo the style of Salgado’s own work, the film is visually striking and rich. Being a portrait of a photographer, it is perhaps half made up of assorted imagery of Salgado’s career, often with commentary from the man himself explaining his choices and elaborating on the context of when the photos were taken. It is for this reason best appreciated on the big screen that can do justice to the complexity and epic scale of some of his work.

Like Herzog, Wenders also incorporates himself into the narrative of the film – especially in the first half, but unlike his contemporary, is a less engaging presence with not quite as much that really needs to be said, and the film is better when it stays with Salgado. There is also an occasional tendency for over-philosophizing his approach to his work to the point of tediousness, but this is a small criticism for the access the audience is given.

An absorbing and beautifully fashioned tribute, The Salt of the Earth is a surprising but truly cinematic journey, which if it can’t always be enjoyed, should be experienced none the less.

Salt of the Earth is in Australian cinemas from 16 April through Madman Films.

Written By
Chris Smith
More from Chris Smith
From the moment the thunderous musical score comes into full swing with...
Read More