There’s nothing like a Nicholas Sparks book-to-film adaptation to send women’s hearts into a flutter. By now we’re fairly accustomed to their general premise. A conventionally beautiful girl. A guy with a chiselled jaw and abs. One of them with a dark past/secret. An older character to dish out wisdom about love. Some sexy times. Then some heartbreak. And then a sappy sweet, often unrealistic ending. Fans of Sparks know what they’re in for, and they’re unlikely to be disappointed with The Longest Ride. Plus, there are cowboys!

Nearing the end of her college degree in North Carolina, Sophia (Britt Robertson), a cute young blonde thang, is two months away from embarking on an internship in New York where she will pursue her art dream. After being dragged along by her BFF Marcia (Melissa Benoist) to a bull-riding competition, she catches the eye of former champion, Luke (Scott Eastwood). With their career trajectories at odds, their newfound relationship is put to the test. A chance encounter brings ninety year old Ira (Alan Alda) into their lives, and he strikes up a friendship with Sophia. Through their many meetings he reveals his own romantic history. Past and present worlds collide, with young Ira (Jack Huston) and Ruth’s (Oona Chaplin) story told in tandem.

Unfortunately, there’s no Channing Tatum or Zac Efron this time around, though there is a Hemsworth doppelgänger in Scott Eastwood (son of Clint – once you know who his father is, you can’t unsee it). Really he’s just there to flex his muscles and oscillate between toothy smiles and thoughtful pouts, and he’s more than capable in this regard. Britt Robertson is disappointingly vanilla – her forced giggle is cringeworthy and it’s a shame the casting department went for someone so unaffecting. She is completely outshone by supporting player Melissa Benoist who on the other hand is a vibrant delight and should have got the main gig instead. Jack Huston and Oona Chaplin are stronger in the 1940s setting. Although Huston is disconcertingly reminiscent of a cleaner Johnny Depp, Chaplin is almost too beautiful it hurts. Such is life in a Nicholas Sparks film. Alan Alda can’t be faulted, though let’s face it: audiences aren’t coming for him. 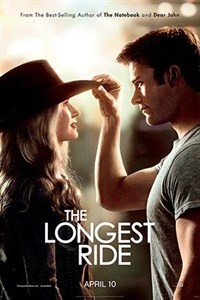 Nicholas Sparks’ adaptations usually manage to look absolutely gorgeous, and The Longest Ride is no exception. North Carolina is unlikely to be at the top of anyone’s holiday wish list, but this film almost changes your mind. Even the redneck bars look appealing. Every actor’s face is softened to remind us how attractive they are, and even the world of bull-riding is made to look slightly less than horrible (although if you’re firmly against animal cruelty, it’s advisable to steer clear of this film). The romance/sex scenes are as corny as you’d expect – even laughable at one point. In one scene, Luke shows Sophia how to ride a fake bull, explaining that it is all about “speed and agility”. As she gyrates on top of it, additional shots of their love making are interspersed. You’ve got to hand it to director George Tillman Jr. – he couldn’t have made it any more obvious that ‘The Longest Ride’ has a few different meanings in the context of this film.

Despite this embarrassing juxtaposition, The Longest Ride is arguably one of the better Nicholas Sparks film adaptations. The two timelines work well, and a prevailing theme about love requiring sacrifice is a powerful one. Throughout the film we see each character make sacrifices in the name of love, and it’s almost worth congratulating Sparks on this important message. But – and it’s a big but – the ending manages to destroy these efforts by tying everything up into a perfect little bow so that Sophia and Luke both get an easy out. They are almost literally handed a perfect future together on a platter, and while this will warm the hearts of many fans, it will prove too much of a stretch for the realists in the audience. It contradicts the message of the film because ultimately, neither character has to sacrifice all that much in the end. Blame can’t be placed on screenwriter Craig Bolotin, as this is all part of the source material and is Nicholas Sparks 101. It’s hard to say which is worse: this, or the repetitive resolutions Sparks has used in previous works which involve villainous ex-husbands being killed off all in the sake of making everything just so much damn easier for the main couple. You can’t just kill people, Nicholas! Use your words! Your beautiful words.

So if you’re a cold-hearted cynic/realist, the flaws in The Longest Ride may be too much to let slide. But if you are a sucker for a happy ending, and you like to watch beautiful white people gaze lovingly into each other’s eyes, then you needn’t worry. You will enjoy the ride.

The Longest Ride is in Australian cinemas from 10 April through 20th Century Fox.