There will come a day when all the Nazi gold stashed away around the world will have been found, and scriptwriters will need to rely upon another plot device to drive their stories.

But for now, we have screenwriter Dennis Kelly’s Nazi gold in a submarine tale Black Sea, with hero protagonist Jude Law as Captain Robinson. He’s been hired to put a crew together and retrieve the aforementioned wealth. His undersea salvage experience makes him the man for the job, and he’s at a bit of a loose end after being made redundant.

The crew is a mix of men, Russians and British (with the exception being Australian Ben Mendelsohn as Fraser, using his own accent), who board a rickety old sub and head off into the Black Sea of the movie’s title. Mistrust though turns to violence and an accident leaves the crew stranded in the deep.

If you’ve seen James Cameron’s Aliens you might notice some similarities; the trapped crew, the untrustworthy company man (Daniels, played by Scoot McNairy), a hail-mary to another location for potential rescue, leaving the rest of the crew to make-do where they are. But there’s also a hint of Moby Dick and Captain Ahab in Law’s captain; obsessed with keeping the gold he pushes the submarine and its crew to breaking point and beyond. 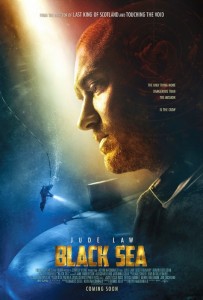 In the hands of director Kevin Macdonald, Black Sea is a claustrophobic thriller with only a few things to drag it down. Robinson is in turns competent and incompetent. He’s willing to save Daniels from retribution, yet his demands of the crew in the final act puts everyone’s lives in danger. Then when Tobin played by Bobby Schofield is injured, his focus on the task at hand is jettisoned. Then again, maybe that’s why he was let-go in the first place? Fraser is a similarly contradictory character, murder seems fine, but losing a man accidentally is not.

And yet despite these shortcomings, the movie does deliver on its promise. With cinematography by Christopher Ross, the movie is shot in dark tones, where you can almost smell the claustrophobic atmosphere of the sunken sub, the sweat of the men, the oil of the engine room and salt of the sea above. Interestingly the movie was shot in a real Soviet-era submarine, The Black Widow which gives the movie the authenticity it needs to work, unlike, for example, the expansive sets of The Hunt for Red October. Fans of coincidence may note that Red October was helmed by Scotsman Sean Connery, while Jude Law puts on a serviceable Aberdeenshire accent for the role of Captain Robinson and does a better job than Mark Strong’s Scots brogue in Kingsman.

In the end, the movie’s drama hinges on two moments of mistrust: the British versus the Russians, and the crew versus the Captain. Without these, we’d have had what would basically have been a dramatic documentary. But with them, viewers get a tense thriller where it’s a coin-flip whether anyone will get out of there alive.

Black Sea is in Australian cinemas from 9 April through Entertainment One.

Written By
Lisa Sinclair
More from Lisa Sinclair
There will come a day when all the Nazi gold stashed away...
Read More