Causing quite a stir at the Cannes Film Festival earlier this year was Mommy, written and directed by Canadian wunderkind Xavier Dolan. Infused with a 1990s nostalgic vibe, the film tells the story of a single mother struggling with her behaviourally troubled son, and the arrival of a shy neighbour who comes to her aid. Dolan’s screenplay and direction exude an absorbing, irresistible energy, and it is a remarkably deft blend of crude humour, surprising tenderness and sharply visceral emotion. The performances are also simply outstanding. With Mommy, Dolan has marked himself out as a stylish, daring filmmaker to watch closely in the future.

Diane ‘Die’ Després (Anne Dorval) has a lot on her plate. After walking away from a car accident in the film’s opening minutes she picks up her wayward teenage son Steve (Antoine-Olivier Pilon) on the way to moving into a new house. To say that Steve is a handful would be an understatement. He is frequently profane, unruly and rebellious, and although it is clear Die cares for him deeply, it is apparent that her ability to cope with him, along with finding a new job, will be practically impossible. But when their neighbour Kyla (Suzanne Clément) arrives during a particularly violent argument, her calming presence bodes well for this new chapter in their lives. It is a fascinating portrait of a highly unconventional, warped mother-son relationship, filled with moments that are confronting, moving, exasperating and a whole host of other adjectives, often at the same time. 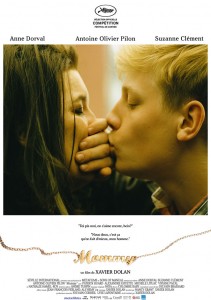 The screenplay crackles and pops with a kinetic momentum that is almost mesmerising. Irreverent, vulgar exchanges between mother and son rapidly unfold at a whirlwind pace, and even the film’s quieter scenes are filled with a compelling, endearing power. Bringing this screenplay to life is the central trio of performances, which are all stunning. Clement is fantastic as the mysterious and insular Kyla, demonstrating control and restraint where possible and necessary, making her moments of provoked wrath all the more impactful. Pilon is ferocious as Steve, who manages to make his unstable concoction of primal anger, free-spiritedness, tactlessness and naiveté not only work, but somehow empathetic. Key to this is Pilon’s commitment to revealing, even indulging in, the heady chaos of Steve’s personality, not only his unchecked aggression but also his vulnerability and warmth. Ultimately though, it is Dorval’s performance that anchors the film’s focus. Her valiant efforts to keep everything together are moving because Dorval is also keenly aware of Die’s shortcomings, rendering her struggles all the more palpably real, and ultimately heart-breaking.

Overall, Dolan has crafted a fantastic film, whose unpredictable tonal shifts in mood and dynamic screenplay make following his future progression as a filmmaker an exciting prospect.

Mommy screened at the 2014 Melbourne International Film Festival and is in Australia cinemas from April 9 through Sharmill Films.

This is Film Blerg’s second review of Mommy, the first written by editor James Madden.