Thanks to Madman Films, we’re giving away 3 DVDs to the fantastic Jake Gyllenhaal thriller NIGHTCRAWLER, available to own on DVD, BluRay and Digital now. 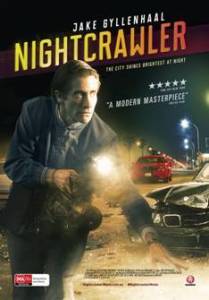 Film Synopsis: NIGHTCRAWLER is a pulse-pounding thriller set in the nocturnal underbelly of contemporary Los Angeles. In his Golden Globe-nominated performance, Jake Gyllenhaal is Lou Bloom, a driven young man desperate for work who discovers the high-speed world of L.A. crime journalism. Finding a group of freelance camera crews who film crashes, fires, murder and other mayhem, Lou muscles into the cut-throat, dangerous realm of nightcrawling, where each police siren wail equals a possible windfall and victims are converted into dollars and cents. Aided by a career-oriented veteran of the bloodsport that is tabloid news, Nina, (Rene Russo), Lou blurs the line between observer and participant to become the star of his own story.

Written By
Film Blerg
More from Film Blerg
Here at Film Blerg, the festive season has had marginal impact on...
Read More