For those who don’t have children of television rearing age you may be unfamiliar with Shaun the Sheep. He was birthed in 1995 in the Aardman Animation studio of the BBC (who have treated us to Chicken Run and the well loved Wallace and Gromit franchise). Shaun, after a few appearances in Wallace and Gromit, has taken on his own tv show since 2007, delighting children of all ages in a whopping 180 countries.

Shaun the Sheep is the head of a flock of half a dozen sheep. He appears to have inherited this role through his tenacious and bold nature and being the only literate member of his flock. He plays off as a slightly impulsive, yet caring leader kept in check by Bitzer, the loyal dog of The Farmer in a brotherly relationship.

The story begins with Shaun in a rut with the monotony of farm life. Aided by his loyal flock he tricks The Farmer into sleeping in for an extended morning of sheeply leisure. Things of course take a wise with the farmer hurling into the city unconscious in a caravan with Bitzer, Shaun and co chasing after him. Everything quickly turns sour after The Farmer wakes with amnesia in the hospital. Shaun must figure out a way to help The Farmer recover and get back home, all while avoiding the diabolical animal control officer Trumper – a man of small ideas inhabiting a physically intimidating body. 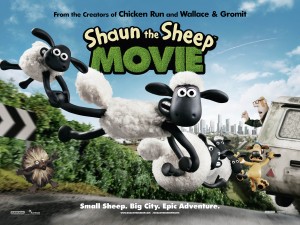 Shaun the Sheep is a silent film, save a few grunts, burps and other such onomatopoeia. Fans of silent gags will take great delight in this film. If you were raised on Looney Toones or Wallace and Grommit this is the excuse to get brownie points by taking nephew/niece to the movies. There is much to love about this film. The humour is universal and the jokes themselves range from subtle nuanced physical comedy to charming and absurd sequences.

On a visual and production level, the film is stunning. Mark Burton and Richard Starzak have teamed up to create a film as colourful as any Pixar animation and with an extraordinary amount of attention to fine detail. Stop animation is notorious for the vast amount of time and resources required to shoot. Individual animators are often only able to capture one or two seconds of film per day. With this knowledge it is quite impressive seeing rusted bolts on bus wheels, yellow stitching on denim or textured tar roads. Films like this are clearly a labour of love for the directors and crew involved. The end result is an authentic reality mixed with cartoonish wonder.

This is a universally enjoyable film. Kids will love the character interactions and well chosen soundtrack. Adults will enjoy the subtle puns and references. The film is well structured with a nice 90 minute run time, well paced with an endearing protagonist and a dastardly antagonist. At the heart of the film lies a simple message. Appreciate the people in your life who do the small things that mean the most.

Shaun the Sheep is in Australian cinemas from 26 March through StudioCanal.

Written By
Ben Isbel
More from Ben Isbel
There are three things missing from Venom. A good story, clear direction and...
Read More