In the land of the blind, the one eyed girl is Queen, so goes the films title and a twist on the old proverb.

Travis (Mark Leonard Winter) is a young psychiatrist living his isolated life in the inner city. His job involves working with at risk patients he feels he can no longer engage with or help. His hopelessness comes at the recent loss of one of his former patients, causing him to closely mimic the downward spiral and mental breakdown of those he tries to help. Travis’ state of mind leads him to a recruitment seminar for a Doomsday cult disguised as a support group. Whilst leaving unconvinced, Travis’ desperation continues and with nowhere else to turn he is taken away to a rural community called ‘The Farm’, run by its persuasive leader Father Jay (Steve Le Marquand). It is here that Travis befriends Grace (Tilda Cobherm-Hervey), the only person he truly trusts and when things go awry, the only person he will risk his life to save.

One Eyed Girl’s conception came about as a rough idea from the films director Nick Matthews, who along with producer/editor David Ngo and Co-writer/supporting cast member Craig Behenna have created a unique take on a cult community seeking to enlighten desperate, or wayward individuals. Rather than the film exploring spiritual exploitation, the cult prays on those in need of psychological nurturing. This helps to make Travis’ undertaking more conceivable than if he was merely being offered enlightenment. 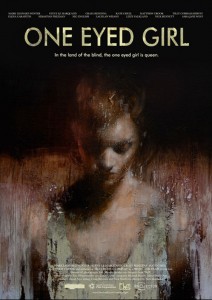 Characters in One Eyed Girl are where the film is strongest. Matthews and Behenna have written some interesting and scarred characters fallen in together on ‘The Farm’. Enhanced by some strong acting performances throughout, but in particular from lead characters Travis, Grace and Father Jay, each trying to salvage the community in their own way. Choosing to cast unrecognisable actors, Matthews and Ngo have not only been able to gather some diverse talent, but have prevented a familiar face detracting from the films authentic atmosphere.

While One Eyed Girl’s plot isn’t quite as strong for the entire film, its mid section is where the deeper aspects of the story become more interesting and engaging. Travis remains skeptical about the intentions of his new community, even after he finds some benefit from living on The Farm. As Father Jay’s true nature is revealed, protecting the sanctity of The Farm becomes priority for better, or for worse.

As part of an initiative by Screen Australia and the South Australian Screen Industry, films like The Babadook, 52 Tuesdays and One Eyed Girl have all received support in an effort to rejuvenate Australian Cinema. With all three receiving positive recognition abroad, it appears to be a promising start for the future.

One Eyed Girl is in Australian Cinemas from April 2 through Projector Films.