Maya Forbes has previously co-written a number of screenplays (including Diary of a Wimpy Kid: Dog Days, Monsters vs. Aliens, and The Rocker), and now makes her directorial debut with her own personal story. Set over eighteen months in late 1970s Boston, Infinitely Polar Bear recounts the time that Forbes and her sister lived with their bipolar father while their mother completed a business degree in New York.

Names have been changed – Forbes is now named Amelia, and is played by her own daughter, Imogene Wolodarsky. Together, Amelia and sister, Faith (Ashley Aufderheide) are significant players, but the film centres on their father, Cameron (Mark Ruffalo). After suffering a nervous breakdown, he is admitted for psychiatric treatment and the girls live solely with their mother, Maggie (Zoe Saldana) in difficult financial circumstances. When Maggie receives a scholarship to a business school in New York, she sees this as her opportunity to make something for herself and her family. Thus she proposes a plan to Cameron: move in with the girls for eighteen months, taking on all parental and domestic duties, with Maggie visiting every weekend. As expected, this is a challenge for Cameron, who must juggle the difficulties of parenting with those of his mental illness.

Bipolar disorder is portrayed here with delicate charm and care. It doesn’t exacerbate any stereotypes of the disorder or go for big drama. Rather, it exquisitely pulls together a series of minor events that pack their own little punches and that give insight into the daily struggles experienced by both Cameron and his daughters. The film doesn’t demonise Cameron, nor does it sugar coat the facts. It shows him as he is – good and bad. Not always the best at parenting, but at other times magnificent at it. 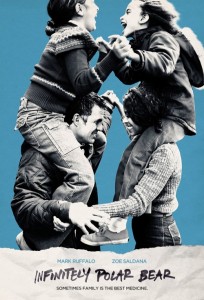 Given the film’s autobiographical nature, it comes as no surprise that the film concerns itself with the effect of Cameron’s illness on his children. Coming away from the film one marvels at their resilience and strength, though that’s not to say that Forbes is concerned with self-presentation. She writes ultra-realistic kid dialogue that shows them being typical brats on many occasions. Their outbursts at their father for embarrassing them are spot on the money, and often very funny too. Amelia, in particular, is somewhat parentified, however she still retains a childish attitude, and it is clear how difficult this experience is for both girls.

There are other issues raised in Infinitely Polar Bear – notably the attitudes to female breadwinners, as well as race (Cameron and Maggie are a mixed race couple) – however, the film doesn’t get up on its soapbox in these respects. Instead it brings these issues to the audience’s awareness, and then it moves on. The film is subtle, though never dull, and is boosted by a phenomenal performance by the unconquerable Mark Ruffalo. Once again, he proves he can do no wrong, and just about breaks your heart in the process with an utterly compelling and believable performance. Zoe Saldana is a dream as Maggie, and Wolodarsky and Aufderheide are tremendous in their young roles, but this film is unequivocally all about the Ruff.

In addition to Ruffalo’s brilliance, the clincher is the film’s theme about love prevailing through hardship. Though Cameron and Maggie’s relationship is clearly strained, and their future ambiguous, the way they look at each other is heart-warming. Forbes’ affection for her father is evident, and her film acts almost as a love letter to him. This is captured beautifully in the final scene which demonstrates the unbreakable bond between a father and his daughters. For a film about manic-depression, it sure does lift your spirits.

Infinitely Polar Bear is in Australian cinemas from March 26 through Icon.

Written By
Claire Robson
More from Claire Robson
Is there a more frustrating director/screenwriter than M. Night Shyamalan? He builds...
Read More