Thanks to Pinnacle Films, we’re giving away 10 double passes for the new coming-of-age flick X + Y, only at the movies from April 9. 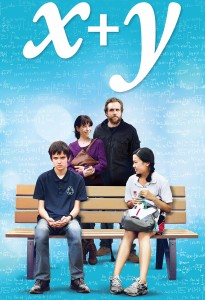 Film Synopsis: X+Y follows Nathan, an awkward, idiosyncratic teenager, grappling with the sudden death of the one person who understood him; his father. As he struggles to connect with those around him, he is introduced to an anarchic and unconventional maths teacher who takes Nathan under his wing.

Soon Nathan finds himself selected for the UK Mathematics Squad and, against the odds, representing his country in Taipei. Over there, the academically gifted aren’t bullied but celebrated, envied and even invited to parties. Nathan’s rational brain can cope with the most complex of maths problems just fine, the real test comes when he meets his female exchange partner, Zhang Mei, and has to cope with falling in love; the most irrational thing of all.

How to enter:
1/ Subscribe to our newsletter at  http://eepurl.com/40DaX
2/ Send your name and mailing address to giveaways@filmblerg.com

Terms and Conditions
1/ Prizes are eligible only to Australian residents.
2/ Film Blerg and Pinnacle Films cannot be held accountable for any delay or loss in prizes.
3/ You must subscribe to the Film Blerg newsletter to be eligible.
4/ Any information sent remains confidential.