Any film that alludes to an erect penis in its title is not likely to win favour with critics. It is, however, likely to attract the right target audience. In this case, Get Hard is well and truly a film made for 12-to-30-year-old men, meaning director Etan Cohen comes pretty close to hitting the mark. For everybody else, though, Cohen’s work may resemble more of a skidmark.

Get Hard plays the odd couple card, pitting rich investor James King (Will Ferrell) alongside middle-class mechanic Darnell Lewis (Kevin Hart). The unlikely duo come together when James is placed on house arrest ahead of his 10-year sentence in a maximum security prison. James is understandably mortified by the prospect of incarceration, but is offered hope by the opportunistic Darnell. In return for some cash, Darnell convinces James he can train him in surviving the prison system, despite secretly having never been there himself.

The storyline provides a solid platform in which Ferrell and Hart can build jokes, but the key plot points are lazily constructed. James’s fear of prison is based primarily on the desire not to be butt-raped. Similarly, the only reason he believes Darnell is a former inmate is because of his skin colour.

As expected, the film contributes absolutely nothing constructive about race, except for its ‘efforts’ to pick on more than one race. In successive scenes, the film switches its focus from an African-American trigger-happy gang to a warehouse of tattooed neo-Nazi bikies. In both cases, we also see women cast as token figures, adding value to these respective tribes literally through their body alone. 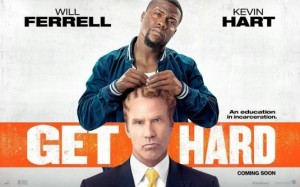 It’s not worth dwelling on these factors for too long, as Get Hard is clearly not an earnest film. With that said, the film’s inability to challenge any racial prejudices is weak, considering how integral race is to the plot and the lead duo’s dynamic.

The appeal of Will Ferrell in the leading role will most likely account for 90% of this film’s ticket sales, and the comedy veteran gives audiences what they want. Despite his flaws, Ferrell’s character demonstrates the familiar level of vulnerability and silliness that has made him a hit in similar comedies.

Hart and him work well in tandem, taking turns at being the funny man. They each have their moments: Ferrell’s 6 hours of unorthodox smack talking is vulgar but creative, while Hart‘s triple-header skit in ‘the yard’ brings the appropriate amount of ridiculousness to the script. The problem is that, like some many other comedies of this ilk, these moments are too few and far between.

Get Hard is as formulaic, stereotypical, and unoriginal as most American red-label comedies come. The flipside is that it’s as formulaic, stereotypical, and unoriginal as many comedy fans like. Sure, watching Get Hard may feel like watching a film you’ve seen before. But, provided you’re the right demographic, you’ll at least derive some enjoyment.

Get Hard is in Australian cinemas from 27 March through Roadshow.

Written By
Kevin Hawkins
More from Kevin Hawkins
July 14, 2014: This review has been updated from what was originally published on July...
Read More