In adapting the Old Testament story of Job and setting it in the modern context of his native Russia, master film maker Andrey Zvyagintsev has crafted an epic character study in Leviathan that, while unsparing in its bleakness, has a lot to say about the current state of his land and its dominant religion, Catholicism.

With the arrival of a lawyer from Moscow, Dmitry (Vladmir Vdovichenkov), we are introduced to the small town where most of the film will take place. Dmitry has come to help an old army friend, Kolya (Aleksey Serebryakov) who lives with his second wife Lilya (Elena Lyadova), and son from his first marriage, Roma (Sergey Pokhodaev). Kolya has recently had his house, where he also works as a mechanic, forcibly acquired by the local mayor, Vadim (Roman Madyanov) – a poster child for corruption with what appears to be unethical ties to the church. From this relatively simple premise the film unfolds like a great work of Russian literature, unpredictable and gripping in its drama; it’s best to be as fresh as you can to let it wash over you completely.

Given its inspiration, Leviathan is a bleak, unrelentingly grim story that offers no hope for its protagonists. While conventional storytelling usually mandates happy endings in its character resolution, this flies sternly in the face of such a philosophy. While a lesser work could become unappealing, this film involves you all the more because time is taken to evolve and fully realize the characters that such tragic events are happening to. Narratively, it is one of the most finely crafted films you are ever likely to see. 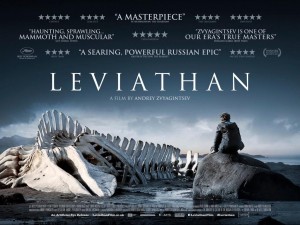 Aiding the brilliant storytelling is a cast of incredible performers who enrich the film entirely and help it rise to its greatness. To single out a single what would be sacrilege, each is both perfectly cast in their role and gets the most out of already strong material.  Zvyagintsev and his director of photography Mikhail Krichman also provide a visually arresting and unique backdrop to the action and elevate the narrative to epic heights.

Given what we’ve come to think of modern day Russia, it’s hard to reconcile this film being made at all. It is a scathing indictment of corruption in politics (a photo of Putin glares down righteously over the mayors head) and not since Bunuel L’age d’or has a film been as openly hostile to the church. Regardless of individual feelings on such things, Zvyagintsev is an intelligent filmmaker and makes for compelling, and strongly held, arguments.

If you can get past its bleakness, Leviathan is a gripping and masterfully made film, very possibly the best of the year.

Leviathan is in Australian cinemas from 26 March through Palace Films.