Paris. August 24, 1944. Diplomacy, based on real life events and directed by Volker Schlöndorff, provides a fascinating depiction of how, over the course of one tense night, Paris was saved from complete and utter destruction. With a screenplay written by Cyril Gely and Schlöndorff, adapted from Gely’s play Diplomatie, the film focusses on the lengthy conversation between a Nazi German general and a Swedish diplomat. However, unlike most WWII films the ‘action’ takes place not on the battlefield but in the arguments, negotiations and placations that the two men exchange. And even though the outcome of the film is known from the outset, it nevertheless manages to be engrossing because of the rich, textured performances and the layered, patient screenplay.

Towards the end of WWII the French resistance is fighting back against the German occupancy, and the Allies are swathing an inexorable path towards Paris. Little do they know that Hitler has ordered Paris to be completely obliterated through explosives rigged to bridges and famous landmarks. The Louvre. The Eiffel Tower. Notre Dame. All set to be razed in a last ditch attempt to halt the progress of the Allies. General von Choltitz (Niels Arestrup) has made the preparations, but he is visited late in the night by diplomat Raoul Nordling (André Dussollier), who tries to convince Choltitz to defy Hitler’s orders. 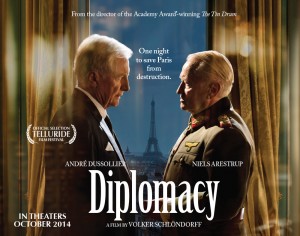 The film’s theatrical origins are evident in that it takes place almost entirely in a hotel suite. Subsequently, it is not surprising that the two elements most critical to its success are its screenplay and its performances. Against the sporadic sounds of gunfire and explosions in the background, the ensuing conversation meanders along, taking subtle twists and turns, changing tone with changing topics and tactics. However, there is a seamless fluidity to their conversation, and despite the dialogue-laden focus of the film it remains engaging throughout because of the controlled way in which information and motives unfold. The screenplay is vividly brought to life by the duet of central performances. Arestrup brings a weary stubbornness to his performance that also reveals shades of doubt and uncertainty, whilst Nordling is by turns impassioned, grave and enigmatic, drawing upon a varied repertoire of persuasive approaches. Together, they have a natural chemistry, imbuing the film with a dynamic tension.

Overall, Diplomacy is refreshing for taking focus on a single incident and taking a more intimate approach to depicting WWII. It is a reminder that often critical outcomes are decided not through brute physical force on the battlefield but through fraught discussions. In these moments, the personal becomes conflated with the political, small-scale encounters threaten to wreak large-scale havoc, and words are wielded as weapons.

Diplomacy is showing as part of the Alliance French Film Festival.