The Connection (La French) is a true crime gangster film, set in Marseilles in the 1970s. It is inspired by the French Connection (like William Friedkin’s The French Connection (1971) before it), which is the story of drug trafficking from Turkey to Europe and then into Canada and the United States from the 1930s through to the 1970s and early 1980s. The truth of the matter is quite complex, and director Cédric Jimenez delivers an intricate story with this film.

The Connection focuses on a magistrate in 1970s Marseilles named Pierre Michel (Jean Dujardin), assigned to organised crime and narcotics after several years working with juvenile crime. Initially unwelcome in the police offices, Michel quickly proves himself to the suspicious and close-knit narcotics team. They have had little success in their efforts to curb the local crime lord and, like the low level street criminals, refuse to say his name. His name would be Gaëtan ‘Tany’ Zampa (Gilles Lellouche), and he is running most of the organised crime in and out of Marseilles.

Zampa is in charge of a huge international trafficking ring, getting morphine out of Turkey to France, cooking it into purest form heroin, then shipping into New York. He has a free reign in Marseille, with law enforcement unable to pin anything on him. His legitimate business is a nightclub, packed with dancers, pumping out the best tunes of the era. 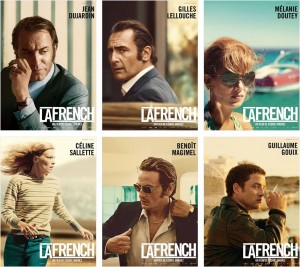 Michel is a little unorthodox in his attempts to impose justice in Marseille, bending the law as much as he can without breaking it. His methods start to produce results, as Michel and the police team start putting smaller fish on ice while trying to get closer to the bigger catch, Zampa. The magistrate Michel is ambitious, and he starts off his new assignment well. Initially he has what seems like a great team behind him but he gradually starts to face too much corruption, Zampa has his bases covered, corruption which reaches further than Michel can.

The two lead actors here are quite exceptional. Dujardin is completely charming, his Michel is quite cheeky in some moments, yet his compassion and determination are evident. Michel is a former gambling addict, his past addiction serves to frame his current obsession with nailing Zampa. Lellouche, on the other hand, is stony faced. His Zampa is ruthless when necessary, yet still the caring family man. Despite being the savvy entrepreneur in the drug trade, he operates his nightclub at as loss in order to please his wife. The two leads are well supported by the rest of the cast, a very tight ensemble. All serve to humanise the contrast between the glamour of the drug trade versus the horror of its effects on victims, their families and the community at large.

The Connection is a very slick film, a credit to Jimenez. The cinematography is impressive, the opening sequence is a solid piece of filmmaking and hooked this viewer quick smart. The recreation of the 70s is very convincing, with evocative use of costume, set dressing and vintage cars.  The soundtrack is just great, lots of nods to the best of disco. The narrative itself is quite complicated, but so too is the factual history The Connection is based on.

The Connection is screening as part of the Alliance French Film Festival.

Written By
Amy Taylor
More from Amy Taylor
American Assassin opens with its intentions of an intense ride made clear...
Read More