Gary Hook (Jack O’Connell) is a young British soldier trained for warfare with ambitions of being sent abroad. However, the year is 1971 and instead his unit is sent to Belfast in Northern Ireland. During a street riot, the inexperienced regiment accidentally abandons Gary, leaving him disorientated and fending for his life.

There have been many notable works about the Troubles in Ireland, Bloody Sunday (Paul Greengrass), Hunger (Steve McQueen) and Alan Clarke’s telemovie Elephant to name a few. ‘71 doesn’t quite harness the same emotion and energy as those previously mentioned, but arguably the viewpoint of the film is the reason for this. ’71 differs from its predecessors by taking the unappealing perspective of the British troops and manages to find compassion in Gary. Gary’s sense of duty derives from dignity and providing for his Son, rather than settling any scores. With an intense leading performance by the talented O’Connell, on a continual rise from Skins, who manages to avoid any clichéd conflictions a soldier in his position might have.

Debut feature from director Yann Demange, the film’s most memorable moments come from Gary’s desperate attempts to get back to regiment headquarters as he is chased through the confined backstreets and houses of Belfast. 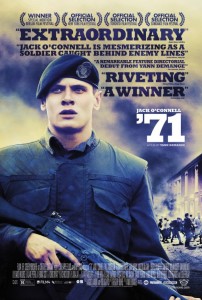 ‘71 doesn’t just contain some thrilling action; the film accurately portrays the undercurrent of confusion at the time. While sides had been drawn, the biggest enemy everyone faced was doubt. Who can be trusted, who’s on what side, what are our orders, what are we doing here? All of which were constantly changing on a daily basis. Furthermore, the British Army’s ineptitude against these uprisings cannot be underestimated, nor is it shied away from in ’71.

Rather than hand holding the audience through the history up until 1971, like Gary, the audience is thrown into the situation making for a more visceral experience and an easier undertaking on those without background knowledge. This also adds to the films building momentum and a foreboding score from David Holmes keeping consistent pace as well.

Since the Troubles were heavily covered at the time through screen and media, but mentioned very little in recent years, it’s easy to be uninterested in the subject matter. Whether you’re familiar with the political conflicts that plagued Ireland, England and Europe for decades or not, there is more to take away from ’71 than just the surface tension.

71 is in Australian Cinemas from March 19 through Entertainment One

Written By
Edward Curtis
More from Edward Curtis
Thankfully, this time no one gets abducted, apparently due to Liam Neeson’s...
Read More