Daniel Alfredson’s movie about the abduction and ransom of the Heineken brewery CEO in 1983 seems, despite an excellent cast, somehow less than the sum of its parts.

This is the second movie concerning the kidnap, the first, The Heineken Kidnapping (with Rutger Hauer as Heineken) was a fictionalised account and told the movie from Heineken’s point of view. This movie on the other hand is based on De ontvoering van Alfred Heineken (The Kidnapping of Alfred Heineken) by Peter R. de Vries, an investigative journalist who wrote this version with William Brookfield. As a result it sticks closer to the facts of the case.

Kidnapping Mr Heineken is marketed as a thriller, with Heineken (the ever interesting Anthony Hopkins) seemingly challenging and manipulating his captors, while the action is pushed to the fore with speedboat chases, gunfire and car crashes.

The movie itself though is fairly different affair, less pulse-pounding action, and more mundane reality with occasional kicks of adrenaline. Kidnapping Mr Heineken is ultimately the story of financially challenged builders who hatch a plan to kidnap the brewing tycoon for the biggest ransom in Dutch history.

Jim Sturgess and Sam Worthington play brother in-laws Cor Van Hout and Willem Hollendeer, with Jemima West playing sister Sonja, married to Cor and expecting his child. The cast is rounded off with Ryan Kwanten and Mark van Eeuwen playing childhood friends Jan and Franz. These four men are the core team who plan and execute the abduction, with help from Thomas Cocquerel whose relationship to them seems unclear. That doesn’t stop him being jailed for his part though. 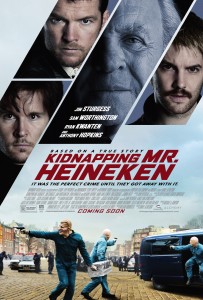 With Sam and Ryan’s inclusion, there’s a very Australian feel to the movie, more-so because on occasion their native accents slip through, and for the uninformed, suggests the kidnapping to be a multinational affair. This may be another example of “name” actors being given roles to encourage investors, but who are not necessarily right for the parts; indeed, unlike the effort made with the casting of Selma (2015), the actors here don’t seem to bear much resemblance to their real-life counterparts. This isn’t necessarily a bad thing, but it doesn’t help a movie that’s fairly formulaic in its execution. Indeed, Jim Sturgess spends the whole movie with dyed blonde hair, complete with regrowth, and glaringly obvious darker eyebrows and moustache, while the real-life man was blonde. In a more engaging movie this might be overlooked, but here it just looks sloppy.

Kidnapping Mr Heineken is one of those movies that may have gone too far in attempting to respect the source material rather than telling an engaging tale, perhaps the same mistake made by the makers of The Congress or even Jobs, Ashton Kutcher’s Steve Jobs biopic. As a result the filmmakers seem to have missed the perfect mix of tension and story which makes a great movie. Certainly it has thrilling moments, with a bank robbery and the kidnapping itself, but these seem to peter out without any great resolution. There may have been stylistic reasons for this, to show that kidnapping a man isn’t all Hollywood thriller adrenaline and gunfire. But it does make the movie dull in places.

Overall this is a workman-like effort which tells the tale of the kidnapping without over-reaching.

Kidnapping Mr Heineken is in Australian cinemas from 12 March through Becker Film Group.