Courtesy of Entertainment One, Film Blerg is giving away 5 copies of each of the following DVDs, out to own on DVD, BluRay and Digital HD: RECTIFY: SEASON 2
Rectify Season Two returns viewers to Daniel’s side – after  being beaten half to death by his alleged victim’s brother and his friends.  He is now unconscious recovering in hospital. Through dreams, prison flashbacks and other devices, we find out more about Daniel’s back story. Daniel’s stepbrother (and Tawney’s husband) Ted Jr. (Clayne Crawford) takes on a bigger and more nuanced role. WATCH TRAILER HELL ON WHEELS: SEASON 4
Conflict arises between the government and businesses, ranchers, homesteaders and the railroad, as all of those interests compete with one another for control of Cheyenne, Wyoming, the most important railroad hub in 1867. Meanwhile, the Union Pacific Railroad continues its expansion westward, and Bohannon adjusts to being a husband and new father. WATCH TRAILER THE VILLAGE: SEASON 2
Follows the residents of one English village across the 20th century and their turbulent lives. 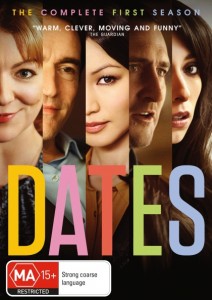 DATES: SEASON 1
From the creator of Skins, Dates is a witty, sexy and personal drama series about dating today. It looks at the complicated and hilarious ways that strangers interact on dates in their quest to find love.