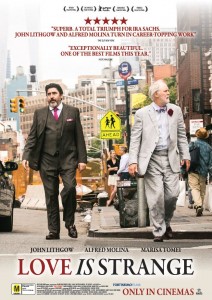 Thanks to Rialto Distribution, we’re giving away 5 double passes to see John Lithgow and Alfred Molina in LOVE IS STRANGE, only at the movies from March 19.

Film Synopsis: LOVE IS STRANGE, starring Academy Award© Nominee, John Lithgow and Alfred Molina, tells the story of a New York couple who after nearly four decades, are finally able to marry.  But when news of their nuptials reaches the Catholic school where George works, he is immediately fired and they are forced to live apart.  Faced with eviction, the two must move out of their apartment into separate dwellings, an arrangement that will test the strength of their relationship. Written and directed by Ira Sachs, who co-wrote and directed 2007’s acclaimed MARRIED LIFE, LOVE IS STRANGE has been heralded as a five-star-rated “total triumph”, by Time Out, New York.

How to enter:
1/ Subscribe to our newsletter at  http://eepurl.com/40DaX
2/ Send your name and mailing address to giveaways@filmblerg.com

Terms and Conditions
1/ Prizes are eligible only to Australian residents.
2/ Film Blerg and Rialto Distribution cannot be held accountable for any delay or loss in prizes.
3/ You must subscribe to the Film Blerg newsletter to be eligible.
4/ Any information sent remains confidential.