By now, you’ve probably heard that sugar is the devil. It’s making us fat, tired, and anxious, all the while rotting our teeth and reducing our life spans. Apparently we need that message rammed down our throats just a little bit more, hence actor Damon Gameau’s That Sugar Film. Coming ten years after Morgan Spurlock‘s Super Size Me, the focus shifts from high fat to high sugar diets. Gameau’s film also coincides with the release of his That Sugar Book, because you can never have too many non-expert opinions.

Gameau, a born again health nut, is the main subject of his own documentary. Determined to show the damaging effects of sugar, he consumes a high sugar diet over 60 days, where he consumes the equivalent of 40 teaspoons of sugar per day (the national average is 30 teaspoons per day). The catch: these sugars must come only from foods perceived as ‘healthy’ such as juices, cereal, muesli bars, and breakfast drinks. Over the course of his experiment he gains eight kilos, adds ten centimetres to his waist, and experiences brief sugar highs and crashing lows. So I suppose that settles it then: sugar is death.

But. His experimental design is just asking to be torn apart by anyone with a basic understanding of science. He admits to not having previously counted calories, meaning direct comparisons between his pre- and post-experiment data are inaccurate. He spends one day – for the sake of shocking and humouring his audience – eating spoonfuls of white sugar instead of the ‘healthy’ sugary foods, claiming this is directly comparable (it’s not). The very next day he undertakes a series of blood tests, highly biasing the results to serve his point. He doesn’t always seem to measure his food correctly, and most importantly, he goes from eating next to no sugar, to a high sugar diet – any change that extreme will obviously cause a shock to the system.

Luckily for Gameau, not everyone will notice these flaws (which is problematic in itself). His film establishes itself as one that will sustain the interest of schoolkids, who are no doubt the main target audience. He utilises fun graphics, simple (but arguably over-simplified) explanations, and gimmicky cameo appearances by the likes of Hugh Jackman and Stephen Fry. Despite being slightly cringe-worthy (Stephen Fry looks like he’s stuck in The Very Hungry Caterpillar picture book at one point) they are effective, because if a celebrity says it then it must be true. Gameau further includes interviews with a number of health professionals, adding at least some credibility to his message. 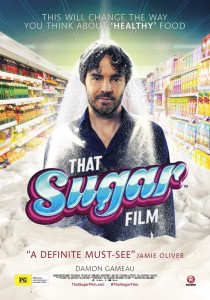 Flawed experiment aside, That Sugar Film does cover other interesting ground worth exploring. Unfortunately, this merging of Gameau’s own experience with broader exploration into the dangers of sugar confuse the message he is attempting to convey. Initially, the message seems to be that consuming the national average amount of sugar (even though he’s added an extra ten teaspoons) has harmful effects on the body, even if consumed as part of a supposed ‘healthy’ diet. This is a worthwhile message, until he veers off course to explore extreme cases of sugar consumption. Venturing to Kentucky, USA, he meets a teenage boy requiring a full dental extraction due to excessive consumption of soft drinks. He also visits an Aboriginal community where he finds that a diet of highly processed foods has resulted in lower life expectancy. He zooms in on Coke bottles, biscuits and other forms of junk food. But wasn’t the point that even ‘healthy’ sugary foods are damaging? His final message is that while he personally won’t eat sugar again, it’s okay to eat it in moderation, but it still feels like he’s telling the audience that they really shouldn’t.

There are important concerns raised in That Sugar Film which should serve to fuel discussion amongst viewers about the negative effects of sugar. The effect on the brain is explored in a way that is easy to understand, and there is an important point made about not all calories being equal in terms of nutritional value and ability to satiate. One of the most interesting points made is that many individuals with unhealthy diets don’t realise how much better they would feel both physically and emotionally on a healthier diet (free of sugar). Instead, they simply start to believe their general lethargy is normal. Gameau is also critical about much of the research on sugar being funded by the sugar industry itself. (In other words, this is how he counters the lack of research evidence currently available that supports his claims.) Though you could argue the film is just one big scare tactic, maybe this isn’t altogether a bad thing if it makes viewers think twice about what they put into their bodies. But conversely, such tactics have previously proven damaging in individuals prone to eating disorders, which is worth keeping in mind if you’re planning on dragging your overweight teenage daughter to see this film.

Gameau keeps the audience engaged by exploring different facets of the issue, but That Sugar Film never quite seems sure of its main point. It’s worth remembering that Gameau is an actor, not a nutritionist, and that ice cream is delicious. Take this film’s claims with a grain of salt, and then dunk it in chocolate and sprinkles.

That Sugar Film is in Australian cinemas from 6 March through Madman Films.