Following the spectacle of his previous film, The Flowers of War (still one of the highest grossing films ever in its native China), master filmmaker Zhang Yimou returns to the more intimate personal drama of Coming Home which reunites him with his muse and frequent collaborator, actress Gong Li.

Based on the novel The Criminal Lu Yanshi, the film begins in the last years of the Cultural Revolution when imprisoned former professor Lu (Chen Daoming) escapes from a forced labor camp and makes contact with his wife Feng (Gong) and daughter Dandan (Huiwen Zhang) who he hasn’t seen since for well over a decade. Before he can even see his wife face to face he is recaptured and imprisoned until his release at the end of the revolution. On returning home he finds that Feng now suffers amnesia, and while she knows she’s waiting for her husband to return, doesn’t recognize Lu as him. 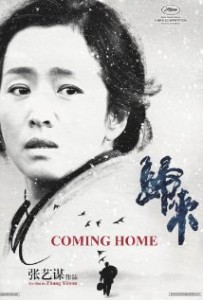 What could easily become horridly melodramatic in lesser hands is handled exceptionally by Yimou. He treats the relationships with a sensitivity and perceptiveness for detail which is aided by the great performances of the three main cast members. Like all great filmmakers, despite the relative intimacy of the story, Yimou gives the film a wide scope and creates a world where the story can not only happen but becomes one and the same with it. He is also an intelligent and humanistic filmmaker; part of the opening credits showing Dandan practicing a ballet, which in itself is beautiful, but is conducted with rifles and the movement of an army platoon doing drills. While not subtle, his point, a metaphor for the period in China, is effectively made.

The performances are uniformly excellent, but it’s hard to go past Gong Li. She is remarkably nuanced in a role that, again, like the film, could easily have bordered on cliché. She brings a sensitivity to Feng that demonstrates the characters strength in the first act of the film and makes us sympathize with her as we see the consequences of her amnesia on her relationships with family. Daoming as the dedicated husband and loving father radiates the love he has for his wife in spite of the situation, and Zhang as the daughter who may have had something to do with her father’s re-capture is excellent as a damaged victim of circumstance and culture.

Masterfully orchestrated by one of the world’s leading filmmakers, Coming Home is a touching, humanistic love story; a true work of greatness and inevitably one of the year’s best films.

Coming Home is showing at ACMI cinemas on 6 March.

Written By
Chris Smith
More from Chris Smith
Set in England circa 1769, and revolving around the court case that...
Read More