Every so often there comes along a documentary that needs to be seen, one that is so stirring that it makes you want to take to the streets and start telling random passers-by to go seek it out. Merchants of Doubt by director Robert Kenner (Who’s best known previous work is Food Inc. in 2008) is an experience much like Alex Gibney’s superb Taxi to the Dark Side, the kind of doco that will leave the viewer seething in a bubbling stew of palpable rage with the new and powerful knowledge it imbibes within you. It plays a little bit like the unofficial sequel to An Inconvenient Truth and is based on the best-selling novel from 2010 which explores the world of professional skeptics, employed by companies to try and color public opinion. The focus here is on how a tiny group of fringe scientists have managed to raise doubt over the validity of climate change using the exact same methods as those employed by tobacco companies after the 1964 Surgeon General’s report.

Yes, the same people who were employed by tobacco lobbies to attend debates and put forward the idea that cigarettes aren’t dangerous and were in fact good for you, an idea that any person would now look back on with contempt and alarm, are now the people who are trying to pollute the debate over climate change by introducing  ideas of a tiny majority of scientists who provide ‘proof’ that climate change isn’t real, or at least deny the idea that humans are responsible for it. Slowly revealed is how professional skeptics have had such a large effect on the public’s perception and debate, showing the methods that are used, the people responsible and how the whole concept has been twisted due to the actions of such a tiny faction (many of whom don’t have the proper credentials to be called scientists).

Merchants of Doubt is primarily told through an American gaze, but bares a striking resemblance to the current state of the issue in Australia; how the government is stuck in stagnant debate and how certain parts of the media have managed to warp the idea in the public’s mind. There’s even the strange idea that has worked its way into the USA that environmentalists who want to do something about climate change are actually cleverly disguised socialists and communists (the term is ‘watermelons’ – Green on the outside and red in the inside).

The experience of watching is akin to a hard, open-palmed slap across the face to anyone who’s ever got on talkback radio and cried any 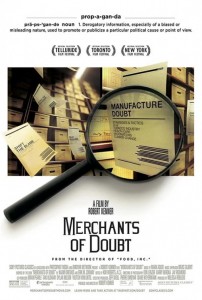 variation of ‘those damn lefties are complaining about climate change again!’ and, without naming any names, a certain columnist for the Herald Sun and a Sydney radio presenter should be forced to watch this, Clockwork Orange style.

Importantly, the reason that this film succeeds so well is not only for the issue it raises and argues perfectly, which will likely have you staring in an open mouthed disbelief with chills crawling up your spine, it’s a well-constructed, entertaining and worthwhile 96 minutes of viewing time. The editing is snappy, the soundtrack is great, the interviews are all fascinating, with all sides getting a say, and while the tone is quite serious for most of the running time it isn’t afraid of having a few comic moments thrown in for good measure. The highlight is when these professional skeptics are interviewed, who it’s clear Kenner is fascinated with, and reveal a total nonchalance about the methods they use, with throwaway lines like “I’m not a scientist, but I do play one on TV occasionally” and openly admit that when the science can’t be discredited, they just politically assassinate the scientist who provided it.

Merchants of Doubt is a documentary that demands to be seen, circulated and popularly debated by politicians, journalists and most importantly you (Yes, you, the person who is reading this) with your friends and family, especially the ones who are in any doubt over the validity of climate change. It took a little over 50 years for the world to become fully aware of the dangers of cigarettes. Regarding the dangers of global warming and the human contribution to it, the sad and truly terrifying fact of the matter is – We simply don’t have 50 years to accept the danger.

This should be mandatory viewing for anyone and everyone, every high-school in the country should be given copies to show to budding young students. This is not only an important documentary; it’s a damn good one too.

Merchants of Doubt will be playing at the Transitions Film Festival in late February.