Still a relative newbie on the scene, director and writer J.C. Chandor has quickly proved he can play up there with the big guns. His feature debut Margin Call, a fictional take on the early stages of the global financial crisis, earned him an Oscar nod for best original screenplay, which he followed up with the one-man-on-a-boat thriller, All is Lost. Both involved potentially dull storylines (surely there’s nothing more boring than finance?) but somehow he managed to grab his audience by the balls and secure their undivided attention. His latest feature, A Most Violent Year, is exquisitely directed, and the dialogue is golden, but this time a dull story didn’t quite cut it.

Abel Morales (Oscar Isaac, and yes they did just throw subtlety out the window with this character’s name) is the owner of an oil company in New York City. It is 1981, one of the most violent years in the city’s history. Abel’s business is suffering the consequences of a series of truck hijackings which have resulted in stolen oil. He reaches crisis point when, after putting a 40% deposit on a property intended for oil imports and storage, he finds himself unable to close the deal. The DA (David Oyelowo) is on his back and the bank can’t justify a loan under the circumstances. It’s all sounding thrilling, right?

Thankfully, this is an exceptionally well-made film in most respects, and the dreary storyline is helped along by impeccable cinematography and direction. The film is injected with a jazzy glow, adding a dash of glamour to an otherwise crapped out city. Time and place is of utmost importance – this is New York at its worst; it’s barely recognisable as the city we all know and love today. It’s a dump, but Chandor and cinematographer Bradford Young (who also rocked his mad skills hard on Selma) manage to find beauty in its decrepitude (bridges covered in graffiti), while still highlighting its ugliness (the outside of the Morales’ house – so grotesque that it’s mesmerising). Chandor continues his trick of regularly hiding visual information from the audience, letting them freak out for a few seconds before they realise what’s happening. In one scene where Abel falls while running and then resumes his chase, the audience is almost assaulted in their eyeballs by an impressive bit of camera work. Visually, this film is just stunning. 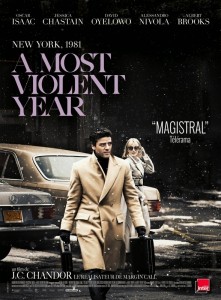 Praise must also be heaped upon its stars. Oscar Isaac appears to have aged ten years in experience and demeanour, and his performance here is worlds apart from those in Inside Llewyn Davis and The Two Faces of January. Jessica Chastain does possibly some of her best work yet as Abel’s wife, Anna. She radiates that tacky glam (of course she says she just LOVES the heinous monstrosity of a house he buys her, and there isn’t a hint of sarcasm: her taste is just that awful). She fires out every line of dialogue with brutal confidence, and she totally pulls off those revolting acrylic nails.

A Most Violent Year has so much working for it. But. Is it interesting? Essentially a story about business, it’s not particularly exciting. However, it’s possible this all comes down to its misleading title and associated marketing angle. A Most Violent Year isn’t all that violent at all. There’s plenty of crime – trucks get held up, oil gets stolen, a gun gets found in the snow. But there’s nothing that sends chills down the spine, except for maybe one particularly well-delivered line from Jessica Chastain (unrelated to violence). It’s not that more subtle films like this can’t be enjoyable – and no doubt this will get raves from some viewers based on its themes concerning morality and the American dream – but it wasn’t what this reviewer was expecting. Margin Call didn’t look entirely appealing, but the strength of the writing and direction made it a winner. Maybe A Most Violent Year could have been one too if it was more upfront about its intentions from the start. Go into this one knowing it’s about business, and you may well be convinced it’s a masterpiece.

A Most Violent Year is in Australian cinemas from 26 February through Roadshow Entertainment.