Never has a woman’s love of dogs been expressed with such bafflement as Mila Kunis does in Andy and Lana Wachowksi‘s Jupiter Ascending. While one might say that the Wachowksis’ latest blockbuster is a dazzling array of costumes, effects and ears, wordplay isn’t really their shtick. In fact, like Mila in making her confession, everyone here seems just a little confused by what they’ve got themselves into.

Kunis plays the niftily named Jupiter Jones, a woman who was destined for great things from the time she was born in a crate on a cargo ship in the middle of the Atlantic Ocean. Yet despite a range of unfortunate and equally nonsensical complications, she grows up to be a toilet-cleaner. That is until a genetically engineered hunter, Cain (Channing Tatum), from outer space no less, comes to rescue her from some aliens that have been sent to kill her. Little does JJ know that she has a ‘royal genome’, which means that she can inherently command bees, and also that she may be in line to inherit a legacy much bigger than what we puny earthlings could have ever imagined.

Lost? Yes, so was I. Drawing on narrative elements from Cloud Atlas and The Matrix, with a bizarre homage to Terry Gilliam’s Brazil in the middle, this is a muddled world of ancient mythology, contemporary soap and destructive galactic ambition, all based around an average girl discovering that she is the key to rescuing a much larger alternate reality. Familiar? Really, it is a pity that these two obviously very talented director siblings have not branched out into new themes. Perhaps they should let someone else do the writing next time. 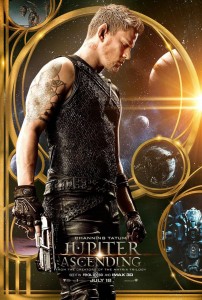 While Mila does well to hold a polite WTF smirk as the uninspiring role of damsel in distress, and Tatum skates on the air in his air boots and in growing bewilderment, the most surprising misfire is that of Eddie Redmayne. Stilted and unable to move his head due to a comically tall metal collar, Eddie plays Balem Abrasax, an evil member of a tyrannical royal dynasty of farmers. (For some context, they farm planets.)

Throughout the film, poor Eddie whispers in a feeble, high-pitched malaise of words, seemingly on the verge of tears, his dreary ruthlessness characterised by jarring outbursts of hysterical rage. He’s so unthreatening, it’s as if he’s just recovering from swallowing one too many jalapenos. Either that, or he gulped them down a while ago and is just starting to feel the consequences. I do so truly hope the Oscars judges haven’t seen this.

So what’s the upside, you ask? Well, the effects are great, and the bird-like spaceships, especially, make for some dynamic, albeit interminable, battles. Sean Bean is there… so that’s something. The Roman-inspired hallmarks of decadence are also appreciated, and Gugu Mbatha-Raw’s (Belle) ears are truly a sight to behold. And, as embarrassing as it is for me to know this, there is actually something for Call the Midwife fans, with Bryony Hannah reprising her role as a nurse here. What a laugh.

As you can see, I’m clutching at straws here to find anything good about this utter turkey of a film other than design, so let’s leave it at that.

Jupiter Ascending is in Australian cinemas from 19 February through Roadshow Films.