Billed as a love story released just in time for Valentine’s Day, Fifty Shades of Grey is anything but. Beginning as Twilight fan fiction, E.L. James’ Fifty Shades trilogy has titillated female readers the world over, and has made her a hefty fortune in the process, despite being atrociously written and disturbing in its message. In the first novel and now film, Anastasia Steele (Dakota Johnson) is seduced by the striking multi-millionaire Christian Grey (Jamie Dornan). Christian tells Ana he doesn’t do romance, but wants her to be the ‘submissive’ to his ‘dominant’. Bondage sex ensues, with a good dose of emotional abuse thrown in for good measure.

The sex in the novel is extremely graphic (but not at all erotic due to terrible writing) and has been considerably toned down for the film due to producers’ wishes to avoid an NC-17 rating in the States (the equivalent to our R18+). The sex scenes aren’t particularly exciting, although the bondage scenes may shock audience members who don’t know what they’re in for (about five people walked out during the screening I attended). A number of these scenes felt uncomfortable due to the blurred lines of consent, though according to the fans, even if she says no, and he forces himself on her, if she ends up enjoying it then it’s so not rape! The thing is, it is. And this film does no favours for women on that front. But the sex isn’t even the main problem here. Christian repeatedly stalks Ana, intimidates her, issues threats, uses sex as a weapon against her, isolates her from her family and friends (she’s made to sign a legal document which prevents her from discussing their relationship with them), and treats her inconsistently, placing her in a constant state of fear and apprehension. Oh, would you look at that: these are all characteristics of domestic violence.

But guess what? Christian is rich and a babe so IT’S FINE. He buys her expensive gifts, flies her across the city on his private helicopter, takes her gliding, and his house is like, totes, spectac. So it’s just all so ROMANTIC! If Christian were a poor, uneducated guy living in a run-down apartment and he exhibited these kind of behaviours, it is doubtful that women would find him so appealing. But because he has money and good looks, it’s easy for readers and viewers to look past this. The message that this sends to both women and men  – that a man’s wealth gives him a free pass to abusive behaviour – is heartbreaking. 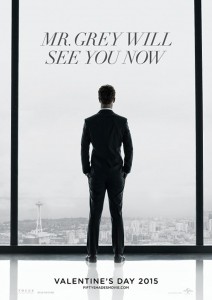 While the abuse in the novel is more evident, the film attempts to romanticise it to the nth degree. Danny Elfman’s sickly sweet score tries way too hard to make outright creepy exchanges seem cutesy and moving, though that’s a laughable notion considering the low pedigree of writing. Screenwriter Kelly Marcel is unable to salvage anything from abominable source material, though thankfully Ana’s woefully written inner dialogue is now absent. However, this is problematic in itself because it greatly reduces the viewer’s understanding of Ana’s persisting fear about what Christian will do to her. There are still plenty of warning signs, but a less critical eye will be able to ignore these. Because he’s hot! And he takes her flying! Duh.

Jamie Dornan is adequate in the douche role, but is probably not quite who the diehard fans were after. Unfortunately Ryan Gosling and Matt Bomer weren’t available, because a) they probably had better offers and b) they don’t seem the type to be part of something that justifies abuse. Also, despite the film’s promise to be outrageously sexy, Dornan refused to get his junk out, so as per usual it’s just the woman who bares all. Dakota Johnson is more convincing as Anastasia, but can surely do better than this “love story” as she refers to it in interviews. It’s disappointing to see Jennifer Ehle (as Ana’s mother) involved in this film – Elizabeth Bennet would not be impressed.

50 Shades of Grey is in Australian cinemas from 12 February through Universal Pictures.

Written By
Claire Robson
More from Claire Robson
After their involvement in the original and hilarious Sausage Party, directing pair...
Read More