Poor casting and a mediocre script are what render Mortdecai a supremely disappointing film. Johnny Depp in the title role is close to terrible. His accent is ludicrous – completely unconvincing – and his hair is one of the worst dye jobs committed to celluloid (or digital) in many a year. Did his character really need the gap tooth and the bottle blonde hair? To that end, did the character really need Johnny Depp?

The film opens in a nightclub; the camera follows a tray of flaming martinis carried by a tuxedoed waiter, finally landing at the right table. Johnny Depp as Charlie Mortdecai is discussing business with some Chinese gangsters. They look at Mortdecai with as much incredulity as we do – already this film is shaping up quite badly. Mortdecai is accused by the gangsters of a previous swindle, his punishment with be the loss of a finger, a brawl ensues. Mortdecai’s manservant Jock Strap (yes, really), played by Paul Bettany, intervenes. This opening sequence, complete with fight scenes, is slightly depressing. One is quite nervous as to where the film will go from here.

The film improves, although only marginally and not enough. Charlie Mortdecai is an art dealer of sorts, more criminal than legit, on the brink of financial ruin. Enlisted by old university pal and MI5 agent Martland, Ewan McGregor, Mortdecai is charged with the task of locating and returning an extremely valuable, missing Goya. He is estranged somewhat from his wife Johanna, Gwyneth Paltrow, mostly she is repulsed by his awful new mustache, but she is also insistent that he restore them to fortune. Martland is something of a threat to the Mortdecai marriage; he has openly lusted after Johanna for many years. 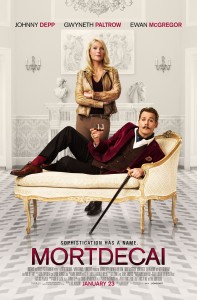 A heist story proceeds to unfold, although the details are a little sketchy. Trailing the missing Goya, thought to have been stolen by a terrorist, Mortdecai is kidnapped and taken to Russia to confront more gangster/art collector types. Escaping thanks to Jock’s dutiful services, the pair land in Los Angeles to join a wealthy art buyer and his nymphomaniac daughter who are also after the Goya. The story is quite disjointed, the heist plot a bit loose.

Mortdecai desperately wants to be funny, but falls embarrassingly short. Opportunities for humor are passed over too often, and bad jokes are over worked with little pay off. Jock is allegedly something of a Casanova, with quite a record of sexual conquests. Allegedly, because, as while there are some encounters noted during the film, not much is made of these. There are barely enough to make Jock a real Lothario, and this slightly sexist ‘women fall for the hit man’ storyline does not make for good comedy. Director David Koepp has some interesting titles to his name, mostly as a writer, he misses the mark here.

With a mostly impressive cast, the film should be far wittier than it actually is. Paltrow does her best with her role and is possibly the finest of the cast. Johanna outsmarts the men, although their ineptitude makes that pretty easy. McGregor and Bettany are left out to dry, they have so little to work with. Cameos from Jeff Goldblum and Olivia Munn are fine, although their talents are wasted. But it is Johnny Depp who is the worst offender, his is really quite abysmal. This film would have been better off without him, and he seems to be the only one enjoying his casting in this role.

Mortdecai is in Australian cinemas from 19 February through Roadshow Entertainment.

Written By
Amy Taylor
More from Amy Taylor
Is there a better way to see in the festive season, than...
Read More